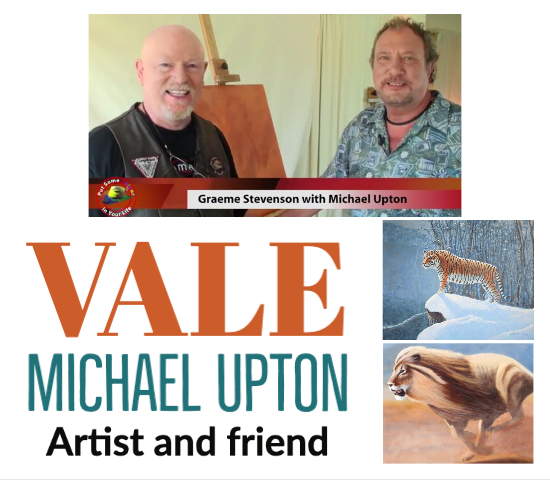 Michael Upton is a well-known wildlife artist who originally immigrated from Birmingham in England to Australia. He has traveled the world extensively and has photographed and studied many endangered species throughout the world.

It is with great sadness we tell of his passing. Michael had been fighting illness for a while, so now he rests in peace.

Michael featured as a Colour in Your Life artist in 2012 and has had millions of viewers from around the world appreciate him and his art.

Closer to home, he is a friend to many and strong member of the Murwillumbah community. He will be missed.

I have been profoundly sad in the last few days. Not only has another wonderful CIYL Artist passed on but my wonderful friend has left me as well.

We were both travellers of the world and devotees to nature and natural sciences and just loved information about the world in general. If I didn’t know the answer to a question Michael Upton always would.

He was a great storyteller about his adventures and, as I always described him, a wonderful renaissance man and fella that could give Indiana Jones a run for his money.

There is a huge hole in my heart that can never be filled.

Enjoy his Colour in Your life Show. It remains his legacy.

Posted in Blog, Your Colour In Your Life Story
← Safe How LongCurious about being on the Colour in Your Life TV Show? Join us on a Zoom conference call to ask all the questions you like. :) →