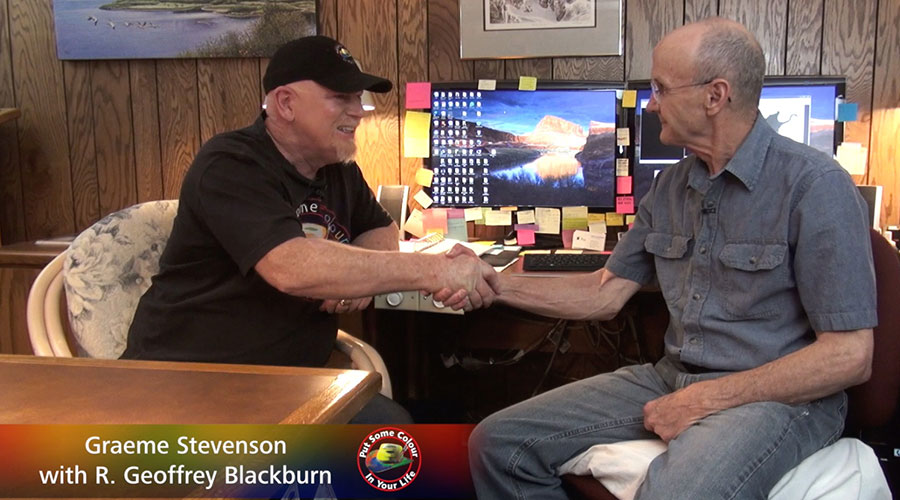 From 1970-1973, prior to R. Geoffrey Blackburn’s “Red Rock Period,” he painted almost exclusively Old West figurative scenes often featuring cowboys on the trail doing various cowboy things and prospectors panning for gold and so on. One of the last of these works entitled “The Posse” was completed in 1972 and displayed at the Jailhouse Gallery in Taos, New Mexico. After a few months R. Geoffrey Blackburn decided that the posse would look more natural riding through a desert than through a forest, so he asked the gallery to return the painting so he could change the background. One by one members of the Posse began disappearing under a coat of paint until, at last, there was only the Sheriff riding along the edge of a cliff, rifle in hand. Finally, he too was painted over and thus the painting, “Desert Canyons” was created. (In just the right light, the posse was still visible under the desert, buried for all time like the cowboys of the old west). The final version now entitled “Desert Canyons” was completed in 1974 and thus began R. Geoffrey Blackburn’s “Red Rock Period”.

Being an environmentalist, when his then father-in-law, James Amon Murley Jr., (a truly colorful character right out of an old west novel, and an old fashioned mining man who had little use for an artist son-in-law), thought R. Geoffrey Blackburn ought to get into something “more substantial” like uranium prospecting and promoting, he could hardly refuse. Fortunately for him, it worked out rather well because in 1970 (when all this happened) uranium was considered THE clean environmentally friendly alternative to coal and all the big energy companies were scrambling to buy fuel for their new reactors so, the uranium boom of the 1970’s was off and running and he had a front row seat! As it turned out, R. Geoffrey Blackburn ended up operating a mineral exploration company based in Salt Lake City, working out of Moab, Utah. Where he prospected, staked claims, drilled, and promoted uranium properties all over the Colorado Plateau. On occasion, he even confronted armed claim jumpers. R. Geoffrey Blackburn worked with local claim owners and major energy companies often doing million dollar deals on napkins in bars and restaurants into the wee hours. The boom finally went bust when the melt-down happened at Three Mile Island that caused everyone to rethink the environmental efficacy of nuclear reactors…

Working and living in canyon country, R. Geoffrey Blackburn was totally captivated by the amazing red rock vistas around Moab. I was concurrently doing photo studies and sketches of the scenes he encountered prospecting in the area. When he returned to Salt Lake City, he turned many of these studies and sketches into paintings- a practice he continues to this day. Given his aesthetic connection to this beautiful country, he was particularly concerned about the potential environmental impact of mineral exploration and mining on the land. Over the years, he had seen many examples of wanton destruction from previous mining operations, some of them dating back to the 19th century when people simply did not consider environmental factors. Therefore, they took great pains to leave any area they explored just as they found it. It would be near impossible to find any trace of R. Geoffrey Blackburn ever having been on any of the properties he explored.

Although R. Geoffrey Blackburn has studied art both privately and at the University of Utah, he is essentially self-taught. His first recognition as an artist came at the age of eight when his work won first prize at the annual exhibit at the world-famous Old Mission at San Juan Capistrano California. He had spent time in Europe studying the work of the Renaissance Masters. While in England in the early 1970’s, R. Geoffrey Blackburn was the principle artist for an international magazine. In late 1987 he “fathered” an exciting new art form he called “Multi-Dimensionalism.” R. Geoffrey Blackburn was granted a patent for this user-interactive invention by the U. S. Patent Office in 1990. Of this new art form, Vern Swanson, Director of the Springville wrote “. . . I was captivated by the beauty, peacefulness and stimulating quality of Blackburn’s creation. “I fully recommend this radical new innovation . . . We believe that his work will make an important contribution to society for the immediate future, bringing art back to the people.”

The streets of Moab are no longer choked with red dust or rumble with gigantic trucks heading to Atlas Minerals to offload their ore. Instead they are full of tourists and off-road adventurers here to soak up the astonishing red rock vistas that R. Geoffrey Blackburn hiked through and painted over the decades.

You can contact R. Geoffrey Blackburn about his art tips or art techniques directly via his website at rgeoffreyblackburn.com