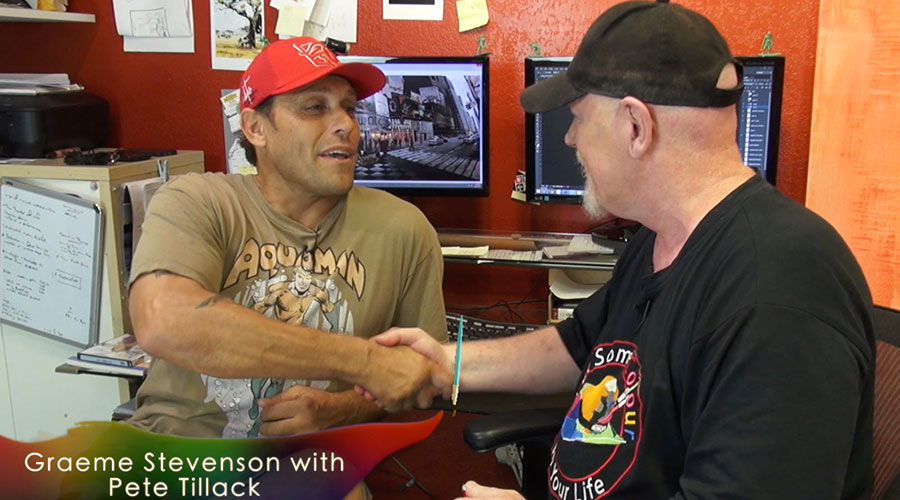 Featured artist Pete Tillack appeared on Colour In Your Life Season Fourteen (14). Read a little bit about the artist here and support our site by joining and watching the episode below.

There are a lot of great artists out there, but it is the unique style of life that the Australian-born Pete Tillack has led prior to his art career that has influenced his narratives on society, and helped separate him from the herd.

After finishing an electrical apprenticeship and business school on his way to building a small company, at the age of 23, Tillack left his home in Australia to endeavor on, what was meant to be, a short European Surf trip. A couple of months turned into ten or so years (the time frame became blurry), and ended with a life being built in California. Filling multiple passports served as an index to the many experiences that helped change his life as he freely roamed the planet, from the giant waves of Hawaii to the longest waves in Peru, the mountains and glaciers of Alaska to the volcanoes of Reunion Island, and from the ancient hidden city of Machu Picchu to the center of the modern world – Times Square.

It seemed the chosen career as a sparky fell further from the plans as he started to reprogram himself with the many cultures and experiences encountered along the journey. The destination was finally changed after unexpectedly being introduced into the life of creation, which proved to be the key to the challenges that drive his passion for connection and a voice.

Being a self-taught artist allowed Pete to draw his own lines from multiple sources and aspects, but it was the internal questions and relationship to society that gives the life to his work that people associate with. Art – like music – is a language that connects us.

“As youth falls into the past, and the present becomes the form carved by my many unique experiences, my work casts stronger meanings, as I look deeper into the connections with our society. I feel lucky that along the journey, I found my talent, and it has allowed me to be able to transpose a blank canvas into a story that captures a viewer.”