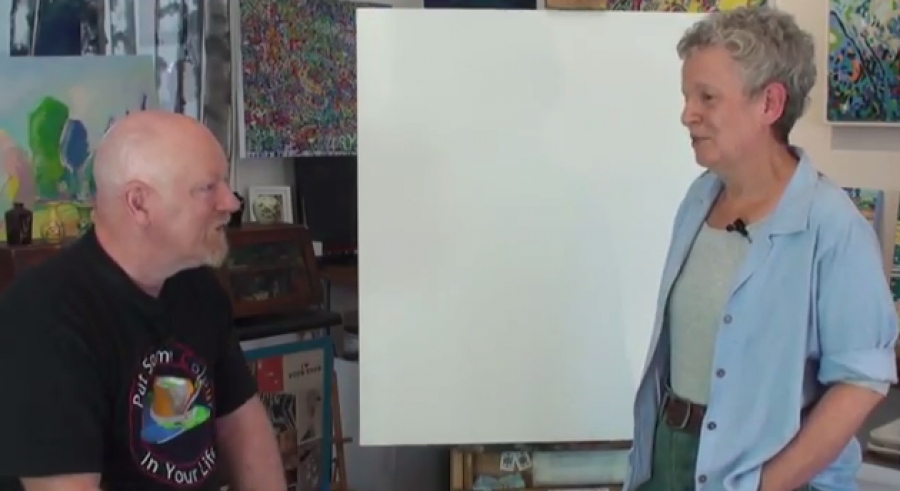 Featured artist Kerry Thompson appeared on Colour In Your Life Season Two (2). Read a little bit about the artist here and support our site by joining and watching the episode below.

Kerry Thompson is an artist who understands the meanings of joy, colour, and life. Kerry was originally a vet and then went on to cartooning and illustrating books. She has a wonderful philosophy towards life and exudes great personal energy.

Based in Tasmania, Kerry began painting with acrylics several years ago in order to explore, experiment, and throw out all of the “shoulds” to see what happened. Her work can be found at regular exhibitions. Her actual temporary gallery, the Little Firefly, pops up from time to time in different locations.

In 1973, after studying zoology in Toronto, Kerry ventured to Australia with a guitar and a backpack, got a shock eating Vegemite, and became Kerry Millard, a rural veterinarian. Seven moves and a baby or two later saw her reach Sydney in 1984 where she gave birth again and became an Australian.

Not having quite enough excitement with three kids under four she brought home a wacky dog and ended up taking him to a dog training club to help him get his act together. She drew some cartoons for their newsletter which people seemed to like, and accidentally fell into being an award-winning cartoonist drawing for publications including The Sydney Morning Herald and Medical Observer, and twice being voted Best Single Gag Cartoon Artist by the Australian Cartoonists’ Association.

Kerry’s paintings have been described as joyful, whimsical, full of life and energy, colourful, honest, and thought-provoking. Each piece is a moment captured from her life in a bold and refreshing exploration. Her trademark is colour and invention, her gift is to distil subjects down to their simplest essence, in an almost childlike manner.

“I use the emotions evoked by colours and their relationships as my tools when creating a work. My approach could be called “mad scientist at preschool” where an insatiable curiosity and interest in exploration and discovery meet a deliberate abandonment to respond to the process itself and the work as it unfolds, turning rules, methods, and even canvases upside down.” ~ Kerry Thompson