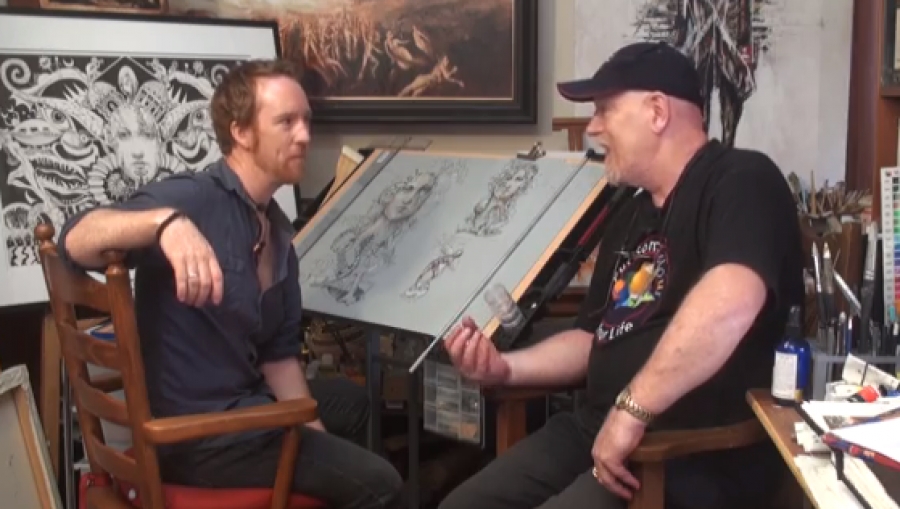 Featured artist John Kennedy appeared on Colour In Your Life Season Four (4). Read a little bit about the artist here and support our site by joining and watching the episode below.

John Kennedy was born in 1973 in Solihull, UK; his family immigrated to Australia a year later.

“As an amusing but true story; for me, art began at the age of five when I chose to follow an ant for a whole day. I remember its journey vividly, across the cracked soils and dry grass. I recall its challenges and the solutions found. I recorded the line of its journey and that became the first line I remember drawing. It’s a reference I return to again and again.”

At 19 John was put under the wing of one of the great Australian Abstract Expressionist painters, Ron Lambert (1923-1995), who had studied under Oskar Kokoschka in Austria. It was then that he began to experiment with painting more intensely; producing one of his most important works, The Lady of Shallot (Alfred Lord Tennyson), a painting that only took the length of time that the poem was recited. It was the beginning of John’s exploration to create works influenced by alternate disciplines.

In 1998 John held his first one-man show ‘Canto One’ and since then he’s been part of many National and International group exhibitions, including the 2nd International Student Triennial Exhibition, Istanbul (2000).

In March 2007 John held his first exhibition in the UK at London’s South Bank Centre in tandem with a concert from acclaimed Jazz pianist Lola Perrin. John exhibited 12 drawings, produced in the inspiration of Lola’s music. John’s collaboration with Lola Perrin continued in 2009 with the production of The Sea of Names to coincide with Lola’s performance at the London Design Museum in Shad Thames.

As well as receiving regular commissions from paintings to theatre backdrops, John has a special interest in illustration. This passion extends from children’s books characters to as far afield as archeological drawings. The latter has seen John commissioned to sketch artifacts exhumed from historical sites in Paphos, Cyprus, and New Zealand for academic publications.