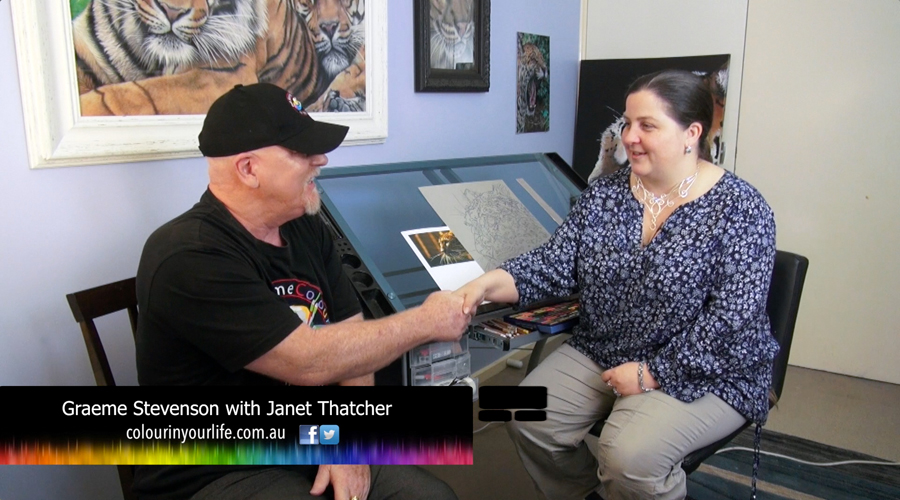 Featured artist Janet Thatcher appeared on Colour In Your Life Season Eleven (11). Read a little bit about the artist here and support our site by joining and watching the episode below.

Born in Canberra in 1981, Janet grew up in a family of artists. Her grandparents were artists, Her mother is and her brother and sister are. Janet’s mother believed that being able to draw meant they would never be bored or lonely. She would place a box of Derwent pencils on the table to tempt them. When they would ask, their mother would say only if we could use them properly as they were very special. Too special for just any old drawing. Of course, they would swear they needed them for something special. Still to this day Janet loves opening a box of new Derwent pencils.

Janet admits that the driving force behind her drawing at an early age was to compete with her sister. Janet’s sister was seven years her senior and she disliked very much any extra attention she received (as most five-year-olds do). So on one particular day when Janet’s mother praised her sister’s picture more than her own, Janet made a decision to be better. Janet was very young but extremely headstrong.

When Janet reached high school she was encouraged to continue. Janet’s teachers felt she had potential. Janet carried on drawing when she could and begged her poor mother to drive her to Mogo Zoo on the south coast, just over two hours away. There they would sit for hours while Janet sketched. Sometimes only coming up with a picture of an eye or nose. They did make many friends this way though.

Janet has had no formal training in art and has been working on her craft for many years. It is something that brings joy to Janet and the clients she shares her skills with. To Janet, that in itself is success in her eyes.