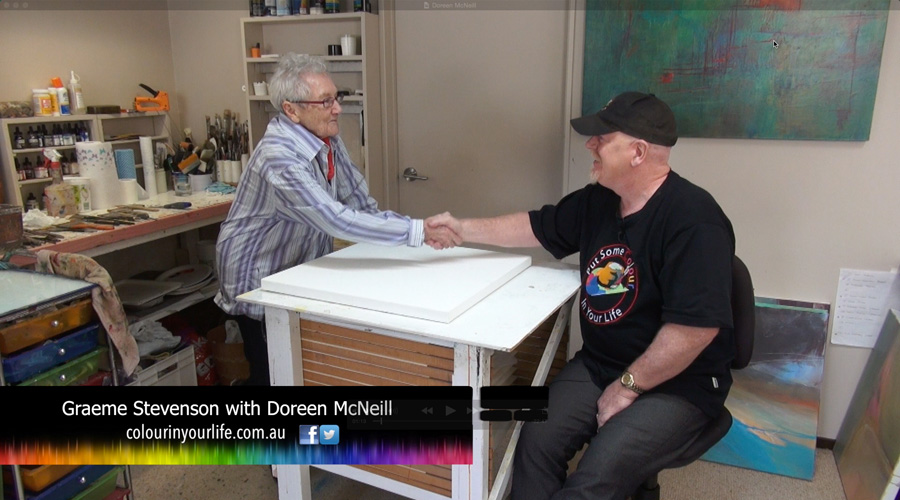 Featured artist Doreen McNeill appeared on Colour In Your Life Season Eleven (11). Read a little bit about the artist here and support our site by joining and watching the episode below.

As a young woman, Doreen McNeill was a technical draughtswoman, drawing navigational charts for aircraft. The work was meticulous and intricate. In the early 1960’s she began painting while living in the Bahamas. Since moving to New Zealand in 1987, Doreen has perfected her contemporary abstract techniques.

Doreen uses abstractions, grids and directions, which are derived from her many years of hand drawing navigational charts for aircraft – before computers were in common use and aircraft were guided only by radio signals shown on distorted roller charts in the cockpit.

While not based on any particular geographical area, the underlying inspiration for Doreen’s artwork comes from the basic elements representing nature. Doreen paints in acrylics and builds up layers of exquisite color to give the painting depth and a vibrant sense of texture.

Doreen does not wish to ‘finish’ her paintings and considers art as a process that is begun by the artist and, if successful, starts to live a life of its own. In her creative process, she works on a painting until a time when she sees the painting as ‘something living’ – when the art begins to work for itself.

Now in her eighties, Doreen continues to paint with passion and gusto and is still exhibiting her work in galleries throughout New Zealand. In 2014, Doreen was a finalist in the Molly Morpeth Art Awards and was a winner at the Miles Art Awards – Friends of the Gallery Award.

Doreen has exhibited her work widely throughout New Zealand and overseas, including Taiwan, where she exhibited with Philip Trusttum and Phillippa Blair. Her work is in the permanent collections of the ASB Baypark Arena, Tauranga Hospital, and the Tauranga Art Gallery, where she had a public retrospective exhibition in 2010.