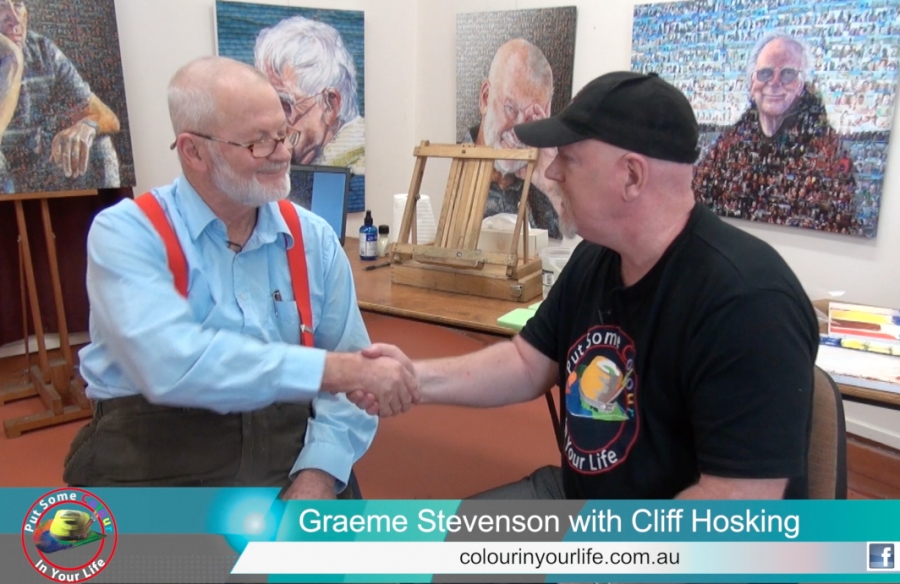 Featured artist Cliff Hosking appeared on Colour In Your Life Season Seven (7). Read a little bit about the artist here and support our site by joining and watching the episode below.

Cliff Hosking has always loved drawing, having an interest in foreshortening and perspective from the time he was five. Continuing to draw in his school years, Cliff won a few drawing and painting prizes and sold his first artwork at thirteen years of age. Cliff Hosking was a good student and eventually completed a degree in Medicine at Queensland University, specialising in Paediatrics. Living in Melbourne for twenty years, Cliff Hosking had a career in Paediatric Allergy, which involved him in Clinical and Laboratory work and research. Throughout his career he painted and drew, always doing portraits of fellow attendees at meetings.

During his early career, Cliff attended as many courses in art as possible. Starting off with oil painting, he tried the ‘new’ acrylic paints when they came in, but they were not the chemistry and colours they are now, and he soon gave them away.

It was in London in about 1967 that Cliff saw a JMW Turner watercolour exhibition. This essentially turned Cliff’s life around, and he has been devoted to watercolours since. In Melbourne in 1969, he met up with Margaret Cowling, an excellent watercolourist and teacher who mentored him for many years. She has been a huge influence on his skills.

Cliff began exhibiting in a small group with her and two friends in Melbourne and Swan Hill. This allowed him to get together a significant collection of work, and he has concentrated on this method of exhibiting his work ever since. He loves working like mad to get an exhibition together and seeing it tastefully hung.

It was almost by accident that Cliff began teaching watercolour. During his first ‘Painting with Light’ exhibition at the John Hunter Hospital, he gave a demonstration in watercolour painting and had a friend request to learn from him. It was only a few short steps from that to organising a venue and advertising, and before he knew it he had a handful of students and has enjoyed teaching ever since.

Cliff is inspired by nature, loving water in many of its manifestations, whether it be liquid, snow, ice and steam. In the last five years, Cliff has become very interested in portraiture and life drawing.

“I am trying to convey the beauty of light interacting with the atmosphere and solid objects in its path. A scene looks different every hour during the day and with the passing of seasons. Watercolour, that magic mixture of pigment, paper and water, gives me the tools to produce the vision I have in my mind.” ~ Cliff Hosking