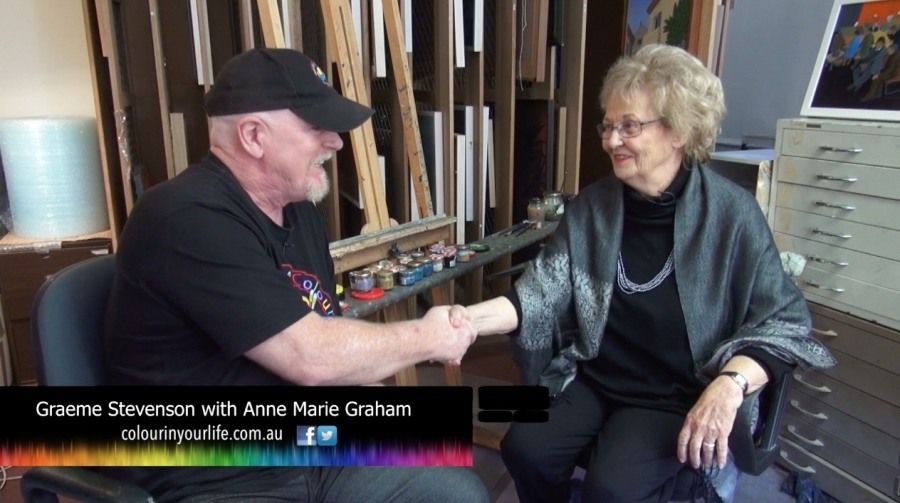 Arriving in Melbourne in September, 1938, Anne Marie’s mother encouraged her to skip school to attend art classes, as she didn’t yet speak English. She booked her into the RMIT Art School at the early age of fourteen. The headmaster, Mrs. H. Brown, saw her work and accepted her as the youngest student ever enrolled to the school. From there, Anne Marie also worked part-time at a printers, later finishing her Diploma at night school.

Anne Marie Graham then attended the George Bell School in Friday afternoon classes, held at his residence in Toorak. She found him to be an inspiring, objective teacher, more so than any other instructor she has had, including Emilio Greco in Italy, or Oskar Kokoshka in Salzburg in later years.

It was in her classes with George that Anne Marie met June Stephenson, a fellow artist and travelling companion for many of her painting trips. Though June passed away some time ago, Anne Marie still misses her, and has not found a replacement for her in her life.

In her time as an artist, Anne Marie Graham and many other young women were limited by the Victorian attitude that was still the norm for their time. Young male artists were regularly chosen and promoted over female artists, with many men and gallery directors believing that a young mother could not paint as well or as often as a young man. Anne Marie remembers one of her female artist friends, quoting her husband as saying ‘go to the kitchen where you belong! Women can never paint as well as men’. Fortunately for Anne Marie, her husband Bill was supportive of her painting endeavors.

Anne Marie Graham’s first solo exhibition was in 1957 at the Tasmanian Tourist Gallery in Collins Street. It was the first of more than seventy solo exhibitions across Australia and overseas in commercial and regional galleries. In Melbourne, Anne Marie’s permanent gallery for many years was Gallery 101, run by Dianna Gold.

Taking the time to travel and further her art, Anne Marie spent time in Jerusalem, Italy, London and Greece. Her work is now held in the Collections of most State and Regional galleries, including the National Gallery of Australia and the National Gallery of Victoria, as well as significant corporate and private collections around the world. A key painting is also with the National Museum of Women in the Arts in Washington DC.