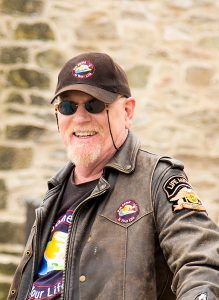 Born in New South Wales, Australia, Graeme Stevenson’s passion for art began at age 5, knowing even then that he wished to become an artist. He took his first art lessons at age 11.  Inspite of always getting into trouble in school for drawing instead of writing, he reached the hall of fame both schools he attended.

“Somehow drawing just seemed more natural to me though it exasperated some of my teachers.”

Alongside art, Stevenson studied martial arts and bred Australian parrots, learning falconry and studying taxidermy in his teenage years. Through these hobbies, Stevenson gained a better understanding of avian anatomy. This would prove invaluable as he combined it with his passion for art, using his pet birds as subjects and starting his journey as a wildlife artist.

After leaving school, he took up carpentry and became a paramedic while attending the Sydney Art College for five years, but left his career as a paramedic in early 20s to travel the globe. He obtained a pilot’s license at age 21 and has since travelled around the world at least 20 times, living in five countries, in search of subjects to paint. Stevenson became a wildlife artist, photographer, explorer and naturalist.

He was commissioned in 1988, at the age of thirty, to provide every image for “The Atlas of Parrots,” which is one of the largest editions in the world regarding parrots. Published in 1991, the book remains one of the greatest reference books on the subject, and can be found in natural history museums around the world, including New York, London and Paris.

His works have been featured prominently in U.S. Art

Magazine and International Artist Magazine, which referred to Stevenson as a “master artist.” Stevenson is also a dynamic public speaker who lectures on topics such as wildlife, painting, science, philosophy and building an art career.

Stevenson is perhaps best known for creating the award-winning TV show, “Colour in Your Life,” which chronicles the techniques and personalities of artists from around the globe to promote creativity and a love of art. The show premiered in 2010, and as of 2019, it is in its 20th season.

On Australia Day 2017, held January 26, Stevenson received the Medal of the Order of Australia (OAM) “for service to the visual arts.” The award is one of the highest honours an Australian citizen can receive.

Stevenson donates his time and talents. In 2003, he raised funds for aids, multiple sclerosis research and children’s cancer research in the U.S. for the Ripple Effect Project. Three of the works were collected by former President Bill Clinton. He also established a charitable foundation, “Paint Your Life,” in 2013, which uses art to brighten the lives of the disadvantaged or physically impaired.

As at 2019 Colour In Your Life is digitally on line anywhere in the world with film crews in Australia, America and England. Over 250 episodes have been recorded, featured artists are enjoying great reviews and progressing their careers, and over 100,000 subscribers can view any episode totally free of charge.