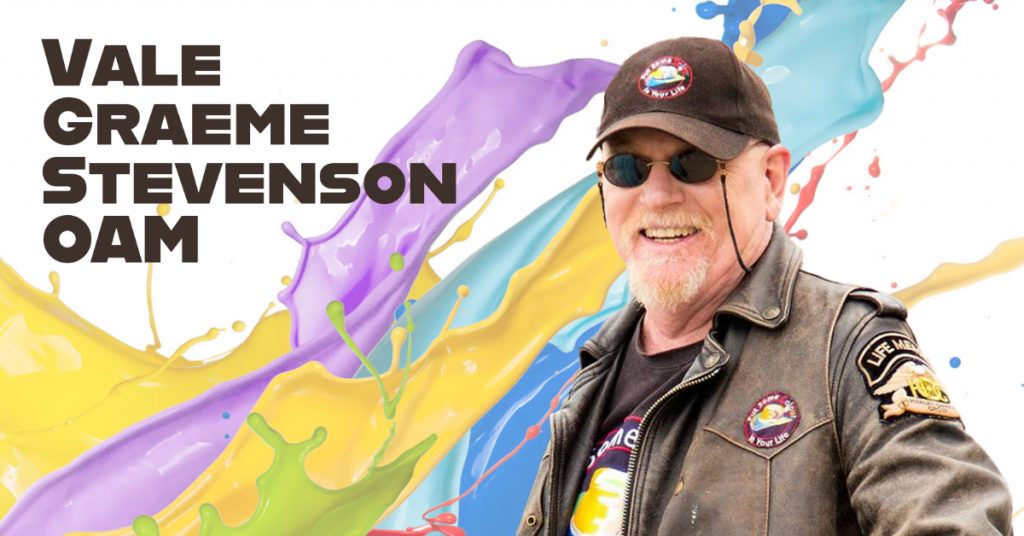 Graeme Stevenson was an indomitable personality, born with a passion and devotion to the arts that was unparalleled.

Graeme's thirst for knowledge and adventure drove his many and varied interests all his life, all of which stemmed from an innate curiosity about the world. He held a firm belief that “art is supposed to be the greatest social commentary in the world - it's a confrontation - it's about saying who we are, when we are, and why we are”.

Apart from art, Graeme also studied martial arts, bred parrots, and learned falconry and taxidermy in his teens. He worked as a paramedic, and obtained his pilot’s licence at 21, before starting his extensive travels around the world. He was commissioned to provide every image for ‘The Atlas of Parrots’, which is one of the largest editions in the world. Published in 1991, the book remains one of the greatest reference books on the subject, and can be found in natural history museums around the world.

Graeme was always an intensely creative individual with a lust for life who loved to observe and listen. Over the years, his artistic process continually evolved, from painting hyper-realism and surrealism, to incorporating elements of dimension, and layering with resin in his more recent multi-media works.

Graeme’s hope was that we could come to understand we are not outside the evolutionary process of the planet, and with this understanding, allow ourselves to become immersed in nature to realise we do not stand above it, but are part of it.

Graeme is well known as founder and CEO of TV Show Colour In Your Life, bringing artists and their stories to life. In 2017, he received an Order of Australia Medal, “for service to the visual arts”, one of the highest accolades an Australian citizen can receive.

In 2021 Graeme received the exciting news that as part of a Space X, NASA and Lunar Codex mission, all Colour In Your Life documentaries will be archived on the moon in early 2023. This was an achievement Graeme was especially honoured by.

As of 2022, Colour In Your Life is available digitally online anywhere in the world, with film crews in Australia, The United States and England. Over 300 episodes have been recorded, and the show is now in its 23rd season. Graeme’s legacy, through the show Colour In Your Life, lives on.

Graeme is survived by his parents, Margaret and Brian, his partner Jo, his sister Lisa and brother John, sons Taylor and Madison, nephew Luke, niece Tanita, and grandchildren.

Graeme’s life will be celebrated at The Courthouse Hotel, Murwillumbah, Saturday 18th June 2022 6pm. Please wear something bright and colourful.

The memorial will be live streamed and recorded via Zoom.

Here is the Zoom link: