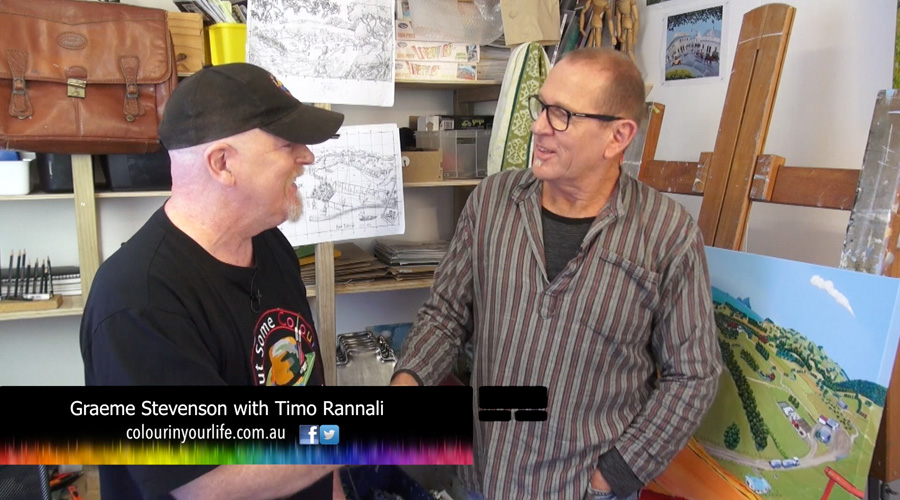 Featured artist Timo Rannali appeared on Colour In Your Life Season Eleven (11). Read a little bit about the artist here and support our site by joining and watching the episode below.

Timo Rannali was born in Finland and came to New Zealand as a child. Being Finnish, original artwork featured strongly in the home;  this perhaps helped nurture his love of art. He has been a full-time artist for 15 years and works from his Mt Maunganui studio.

He originally trained as a photographer but later went on to become a teacher. His desire was to become a secondary school art teacher but instead found his way into teaching at the primary level. While teaching art to primary students, he discovered the magic of a naive approach to representing the world through art. His students strongly influenced his genre, which can be described as “stylized realism with a naive bent”.

Timo loved the stories that were told through the student’s work. He observed that their work was marked with the vibrancy of color, exaggeration of shape, and the use of wide viewpoints. Timo decided to adopt the same principles in his own work. However, he still retains a certain maturity in the execution of design, content (the composition), and techniques used to achieve these. He endeavors to breathe a life force into each of his creations.

He likes to tell stories in his work that celebrate life and the environment. His genre allows itself to be easily used in commission work where clients want a celebratory record of certain aspects of their lives (eg: home, favorite locations, lifestyle, memories). So most of Timo’s work these days is done on a commission basis. In order to capture the essence of what a client needs and wants, Timo has to develop a relationship with each person. This he sees as an added benefit of his work. He views doing commissioned work as a privilege and honor, as he is, to a degree, entrusted with many personal aspects of his client’s lives.

Even though Timo loves to paint all manner of subject matter (eg: landscape, still life, philosophically, theologically, politically themed work) he makes most of his living by doing landscapes. People often say that he captures the essence, energy, and vibrancy of New Zealand in his work.

Timo usually paints in acrylics onto stretched canvas. However, commercial work (eg: for reproduction purposes) is done on paper. With landscape work, all preparation is done on location. There he prepares a number of quick sketches and takes reference photographs as a backup. Back at the studio with the information he has gathered, he prepares concept/working drawings by using ink for outlines and pencil for shading.

He finds that by using brush and ink in these initial sketches he retains a certain “looseness” and flow in his designs, which are essential to his genre. These drawings are then gridded and then transferred onto the canvas. Initial underpainting using vibrant washes (often using primary colors) is vital to the effect on the finished painting. Many layers of quite heavily applied paint give his work its unique look. Paintings take weeks/months rather than days to complete.

Timo has in the past been quite involved with the reproduction of his work through Timo Design Ltd (eg: tee-shirts, greeting cards, prints, licensing of images, etc). With his love of New Zealand, he was motivated to produce a book of New Zealand landscapes – “Aotearoa New Zealand: A Land To Love“- a project that took 2 years to complete. This was published in 2009 and subsequently all 3,000 copies were sold.

Timo is no stranger to exhibiting. Until about 8 years ago, he was a partner in a collective art gallery in Mount Maunganui. This gallery provided him many opportunities for solo showings and also exposed his work to a wide audience. In short, the experience was very helpful to further his career. Eventually, busyness with commissions made it difficult to help operate a gallery as well, so sadly he gave that role away. Because the bulk of his works these days are pre-sold (commissions) Timo does not get much opportunity to exhibit. When he does, it is usually through Mt Maunganui Gallery, “Zohar”. However, his last two major exhibitions were both retrospective exhibitions held at the Creative Tauranga Gallery (2012, 2014).

For the last seven years, Timo has rented a commercial building where he was able to produce a number of large works – over that period he produced seven pieces that were each between 3 meters and 4.7 meters wide. He has just built a small studio at home where he now works. If any extra large jobs come along, he has a space he can rent short-term to complete these.

Timo is passionate about his work… a lucky man able to earn a living from doing what he loves!