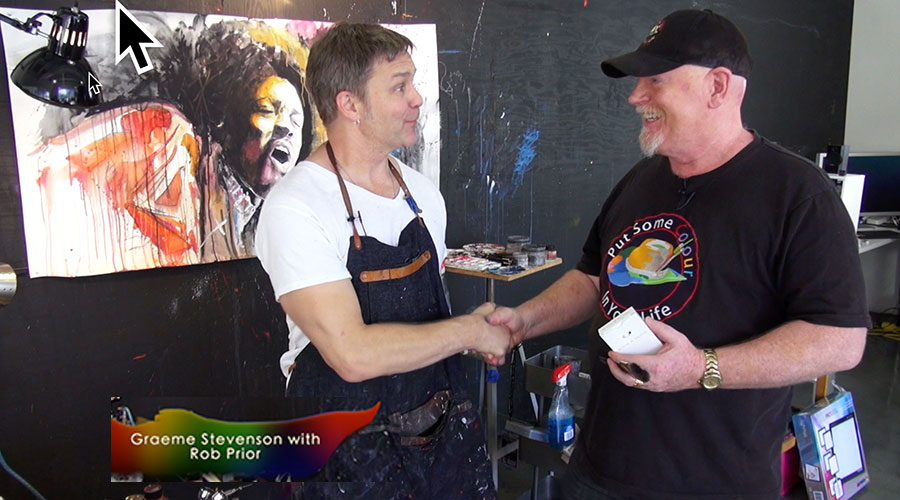 Read a little bit about the artist here and support our site by joining and watching the episode below.
Rob Prior is a comic book artist and illustrator who has enjoyed a 20-plus year career working with the industry’s biggest publishers, including Marvel, DC Comics and Image Comics. His work hangs in private collections and his skills as a storyboard artist are tapped for clients such as Anheuser Busch, Nikon and Monster. To manage all of his projects, Rob taught himself an unusual skill: to draw with both hands.

Rob Prior started at a very, very young age. He had been trained to be an artist before he could walk. Coming from a family of artists, though none by profession, it was only natural that he would become one as well.

When Rob was about 10, he knew at that point that he wanted to be an artist. Then he developed these morbid thoughts of, “What if I lose my right hand and can’t draw?” I’d be screwed, I thought”. So, he quit using his right hand and used his left hand. Training himself to do everything with his left as he did with his right.

Eventually, he began to use both hands. This came about when he had some math homework and a painting due at the same time. With a pencil in one hand, he did math homework, and with a brush in another, he painted. This was the start of painting with both hands!

A lot of what Rob Prior does is centered on pop-culture. His work has involved comic companies: Marvel, DC Comics and others and he has worked for Lucas Films. Rob has done a lot of different things. “it’s cool to draw super heroes”.  When Rob got his first job drawing a super hero he worked on a comic with a famous penciler, Mike Grell. He was thrilled! It was like living a dream. He got to draw heroes and do all the things he used to dream of as a kid.

Rob Prior has worked on such a variety of projects over the years. Spawn the Impaler (Image Comics) and the Terminator series. Video games like Darkness, Ghostrider and The Hulk. Book covers for Random House—even sculpting and painting creatures for the last series of Buffy the Vampire Slayer.

Rob literally works with whatever he feels like picking up that day. He likes to mix everything. Rob starts almost everything traditionally in pencil form, then will lay down some paint, whether it be watercolor, gouache, oil paint, whatever, and then scan that and either finish it on the computer or print it from there and continue to work on it.

Traditionally, a big fan of Canson paper and gouache. Canson offers a wide variety of papers, gouache from Royal Talens for their consistency.