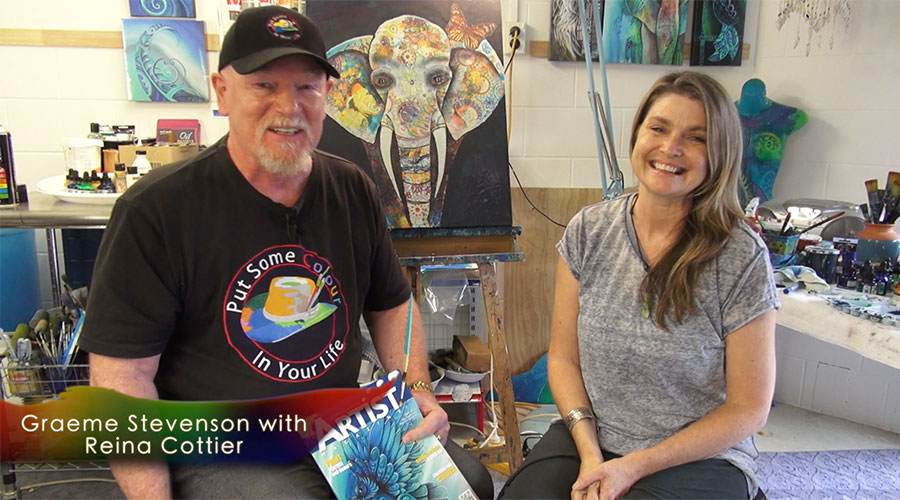 Featured artist Reina Cottier appeared on Colour In Your Life Season Fourteen (14). Read a little bit about the artist here and support our site by joining and watching the episode below.

Reina Cottier was born and raised in Aotearoa. Living in Tairua (Coromandel Peninsula) she studied art right through school winning many awards. After a career in hairdressing, and owning a salon for 9 years, she sold everything up and took up painting. Here she found an avenue for expression that was previously undiscovered inside of her.

Right from the start Reina was drawn to painting themes strongly associated with different cultures, particularly Maori & Pacifica, along with sun, surf, nature. She found the koru was a prominent feature that emerged in almost all her paintings. It became her feature symbol in most of her artworks, along with strong ‘ocean’ themes, which evolved into oceanic creatures, especially since moving to the beach.

Inspiration is all around Reina; she literally breathes it in on a daily basis. Reina is constantly inspired by the majestic mountains to the west and the wild surf beach to the east.

“My art has developed and evolved immensely, with a somewhat ‘other worldly’ feel to it… at first it was totally experimental both in expression and technique, now it is certainly still very experimental, (I love being in the moment, no planning and just seeing what evolves on the canvas), but I have developed a certain style that seems to appear, whether consciously or not.”

Her work has been featured in 4 books, and just recently Reina not only had a 4-page spread in NZ Artist Magazine, but her piece “Guardian” (the flying owl) was on the front cover. Reina’s paintings are in private collections worldwide.

Her work varies, sometimes mixed media, sometimes acrylic, she likes to experiment with no rules or limits. Reina is not interested in what is ‘accepted’ in the art world. She is interested in walking her own path, all whilst staying open and vulnerable, knowing that this is an ever-changing, growing evolving experience every single day. Her art is constantly evolving along with herself; she is forever stretching, taking risks, trying new themes and techniques. Reina paints at least 5 days a week and loves each and every minute of it.