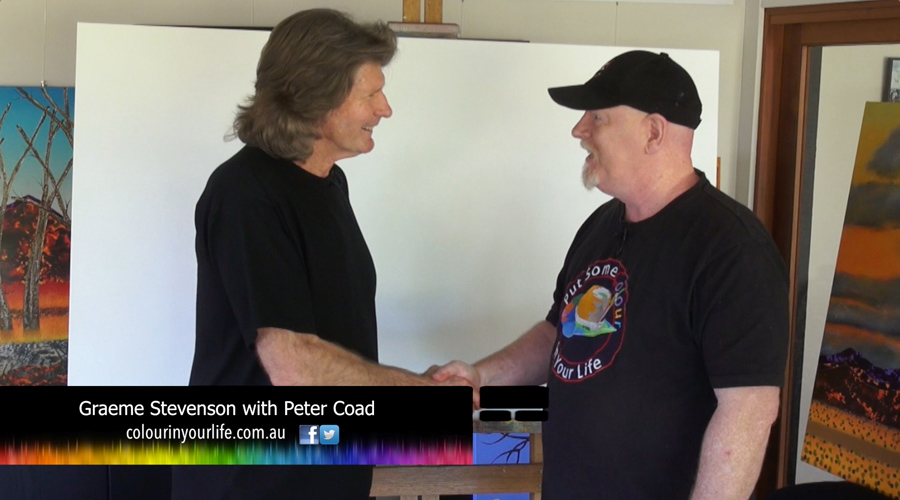 Featured artist Peter Coad appeared on Colour In Your Life Season Eleven (11). Read a little bit about the artist here and support our site by joining and watching the episode below.

Peter Coad is a confident, energetic artist who uses vibrant colours for his vigorous interpretations. They capture the glowing earthy yellows and oranges of the land and mountains, the ephemeral purples, aqua and blues of the sky and lagoons and they reflect the uniqueness of the terrain, the changes of the day and seasons and one can feel he has connections and awareness of the indigenous myths and legends of the land.

Born in 1947, Peter Coad spent the first 10 years of his life in the Mallee town of Karoonda approximately 120kms southeast of Adelaide. He was surrounded by huge inspiring vistas and enormous skies which explains his abiding interest in the landscape, its open spaces and respect for the harmony of nature.

His career began in graphic arts excelling and winning awards in the fields of Silk Screen Printing and Signwriting but his passion and demand for his paintings eventually saw him become a full-time professional artist. He has been painting for nearly 40 years, held over 60 Solo Exhibitions and participated in numerous group shows. One major group show, in particular, was an All Australian Artists exhibition held at the prestigious Kubo-Kuxta Gallery in San Sebastian, Spain. He has also served two terms as Vice President of the Royal South Australian Society of Arts, lectured on his art and been a participant, advisor and curator of exhibitions in Australia, Malaysia, Hong Kong, Japan and the U.S.A.

He makes regular artistic treks to many destinations in Australia and overseas. The knowledge gained of a particular area clearly assists in capturing the essence and feeling of the land as well as the colour and spirit of the place, and from these journeys, Peter produces several series of work.

His achievements in other areas of the arts are many, the following being just a few. In 1991 he organized and curated an exhibition held in Penang, Malaysia, of artwork of members from the Royal South Australian Society of Arts for the Adelaide/Georgetown Official Sister City, 25th Anniversary Celebration Visit with the Lord Mayor and Council Members of the City of Adelaide. One of his paintings was given as a gift to the City of Georgetown. In 2001 the Adelaide Registrar of Births, Deaths and Marriages chose Peter to be the first contemporary landscape artist to have two of his paintings reproduced for the Australian Commemorative Birth Certificates for the Year of the Outback. In 2005, Hollister Incorporated of Illinois U.S.A. chose one of Peter’s works to reproduce for their Christmas gift to their worldwide clients. Cairns City Council in Queensland, Australia, chose Peter’s paintings to give to two of their Sister Cities, one in 2005 to the City of Oyama in Japan as a commemorative gift for the signing of their Sister City Agreement and in 2006 one was given to the Mayor of Zhanjiang in Guangdong Province, China, for the Official Opening of the Australian designed “Friendship Gardens” in Zhanjiang.

Peter is also well-known to Film audiences as being commissioned by internationally acclaimed Australian Film Director, Rolf de Heer, to paint 14 large canvases which appear as static scenes in the Award Winning film ‘The Tracker’ (one of the main features of the Adelaide Festival of Arts 2002 and the 51st Melbourne International Film Festival, also selected to participate in numerous International Film Festivals). The inclusion of original artwork in this way was a first for an Australian feature film and the process taken and images of these paintings are published in a Book and can be seen on a Documentary appearing on the DVD of the Film. Peter has also produced several documentaries which record his career in travel and painting.

Peter’s paintings reveal to us landscapes of harsh yet breath-taking beauty as he skilfully blends symbolic interpretations of mountains, wetlands, vegetation and birdlife in an endeavour to convey an awareness of the delicate balance of the environment.