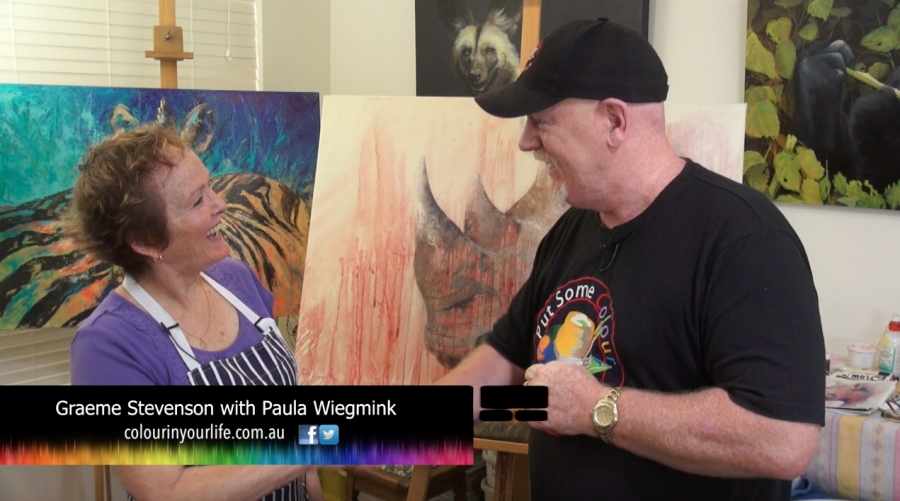 Paula Wiegmink, based in Dunsborough, South West Australia, was born in Rhodesia/Zimbabwe. Having spent her early childhood on farms, she soon developed a love for the African bush and wildlife. Her interest in drawing and painting emerged at a very early age. Encouraged by her mother, she started sketching the animals on the farm and doing portraits of anyone willing to sit still long enough!

In 1994, she immigrated to Perth, Western Australia with her husband and children. Shortly after joining the Canning Arts Group, Paula was invited to exhibit as ‘Artist of the Month’. She then went on to conduct all media night classes for the next 6 years.

In 2009, Paula Wiegmink launched her first book titled, ‘Footsteps in Time,’ a family journey from the earliest of her ancestors, on her fathers side, to arrive in Africa in 1709 up to 2009. Over a 5-year period, Paula returned to Africa where her research took her on an incredible journey. The book launch coincided with her first major solo art exhibition, ‘The Winds of Change’.

In 2013 Paula Wiegmink was approached by RAGES, a proposed Australian Rotarian action group who asked for permission to use the image for their logo. The image was also used for the cover of a book used by a South African Rotary Group to gather signatures for the cause at the Rotary World Congress in Lisbon in 2013. Currently (2015), a poster of the image is being used for the international Rages campaign ‘One Fight Unite’ which is to be signed by celebrities from all over the world. This campaign is in collaboration with Besureis who have joined the fight.

Now able to immerse herself in her own creativity, expressing her passion for life through her art works, Paula enjoys experimenting with texture and colour, using multi-layering techniques in various mediums, styles and subjects. Through her art she hopes to create awareness and draw attention to the vulnerability of endangered species and the natural world.

A multi-award winner in oil, pastel, acrylics, watercolour and mixed media Paula continues to exhibit in both group and solo exhibitions.