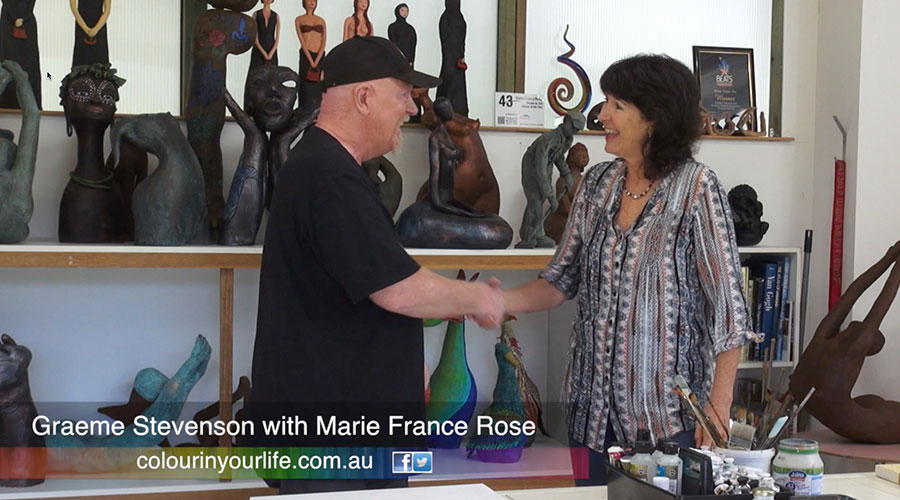 Located in Uki, Northern NSW, Marie-France Rose is an active member of the art community around her area, exhibiting her work locally and running creative workshops in sculpture for local artists, children and enthusiasts. The French-Canadian sculptor artist has lived in Australia for almost 30 years, mostly in Coolum Beach and Byron Bay Uki and has travelled throughout the world.

From early childhood she developed her passion for art and by the age of 18 had commenced studying art, theatre and dance in Montreal.

After extensive world travel including America, South America, Asia and Europe, France settled in Australia in 1979, where she pursued a career in the restaurant and hospitality industry while raising 2 beautiful children, her artwork providing a calming sanctuary from the general demands of life.

1997 saw France leave the hospitality race to embark fully on her long awaited journey in art. Completing an Advanced Diploma in Ceramics and Visual Arts in 1999 and after a couple of successful exhibitions on the Sunshine Coast including Noosa, Yandina and Mooloolaba, France took her fresh eyes and creative energy all around the world via the Salon Des Metier D’art in Montreal and Germany’s – Frankfurt Trade Fair for inspiration and expression.

Since returning to Australia in 2002, France has developed an eclectic style for each of the multitude of mediums she now explores. Oil, acrylic and clay can be found in a variety of mixtures in frames or simply expressed in sculpture. Settling in Uki has freed France to dedicate her creativity to art, providing the time, space and motivation most artists dream of.