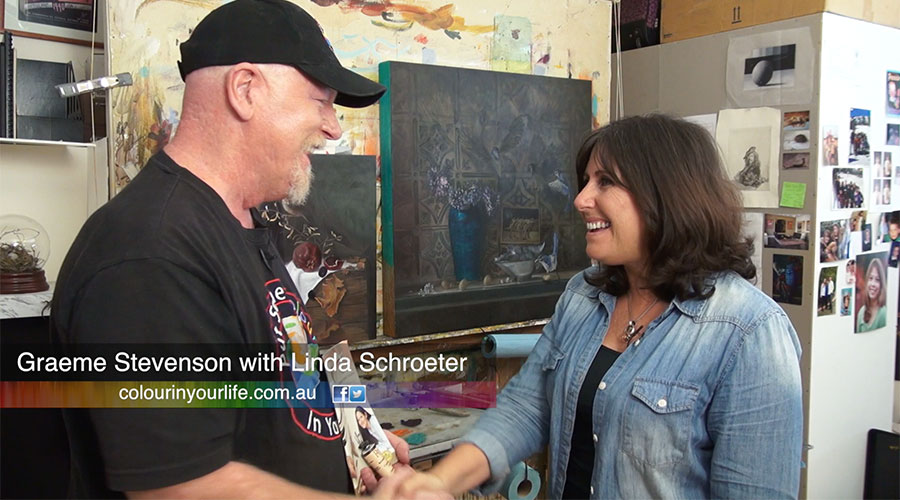 Featured artist Linda Schroeter appeared on Colour In Your Life Season Thirteen (13). Read a little bit about the artist here and support our site by joining and watching the episode below.

At school, Linda Schroeter paid attention to nothing but her art and was often caught drawing animals in her journal during math class. The painting she most admired then was Albrecht Durer’s ‘A Young Hare’ (1502). After selling a few paintings in a local art gallery Linda started painting on commission when she was in her early teens and continued throughout her art college years. Studying in the South Australia TAFE – School of Art, in the early ’80s, Linda found herself caught in classes teaching abstract expressionism when she wanted to do realism.

Linda became discouraged at how little of the old masters painting techniques were learned from her art school and went on to study commercial art and illustration, funding her continued education herself as a signwriter, a grape picker, gas station attendant, bar-tender/waitress, and Tuesday night cook at the local pub.

Eventually, Linda landed a job in an advertising agency in Adelaide, South Australia. She worked in the corporate world as a graphic designer and then ran her own design business developing wine labels and point of sales material for wineries in San Francisco for 28 years before opening her art studio in 2008. Linda continued to work on her art education, seeking out other artists she greatly admired and training with them in San Francisco and in France. Linda’s work started to get some recognition, winning awards, and she was asked to do workshops in museums and local venues and to judge gallery shows.

In 2014 Linda re-named the studio, Russian River Atelier, after developing it as a collaborative teaching space, dedicated to teaching the traditional fundamental skills to anyone interested in realism. Here she sought out instructors who all have graduated from three of the highly rigorous classical ateliers in Florence that were living locally, giving them a space to teach and to pass onto others a time-honored tradition.

Linda is interested in the complexities of the environment and wildlife of which we are all deeply connected and reliant on to keep our ecosystem in balance. Her paintings often depict birds or animal objects sourced by humans such as furs and shells. She paints from her life’s personal experience, often using metaphor to convey a message to the viewer through intellectual interpretation and discovered meaning.

Oil is her medium, using light manipulation through paint layers, pushing forms and elements to create the sense of three-dimensional space.