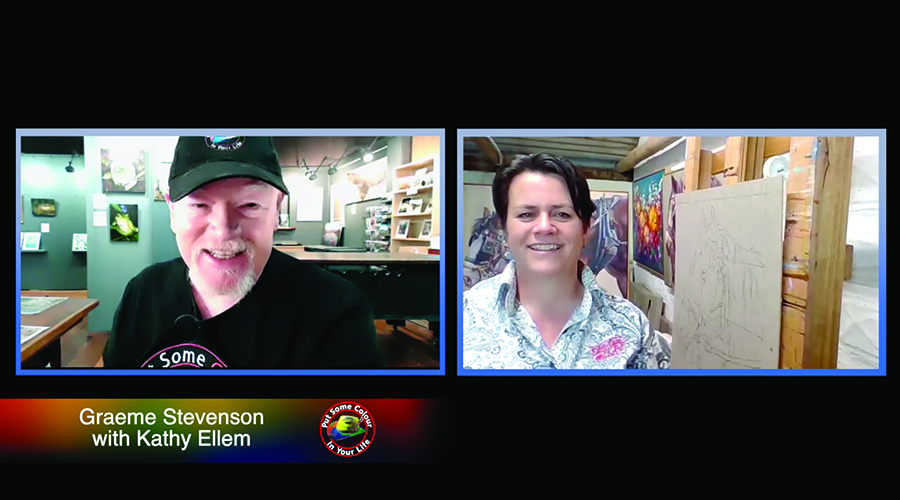 Kathy Ellem is a realist painter, known for her depictions of Australian rural life. Based in North East Victoria, Kathy has become well-regarded as an equestrian artist, with a passion for painting draught horses. She began painting and sculpting full-time in 2009, and since this time has exhibited at least twice a year or more.

Kathy grew up on her family’s apple orchard in Beechworth. After finishing school she thought the logical path would be to complete a Biology Degree with a major in plant science. She took a ‘gap year’ on an agricultural exchange program to Canada, where she met her future husband Chris, whom she would eventually join on his family’s farm in central Queensland. She began painting after she and Chris took on their own 20,000 acre property in south-west Queensland in 2003. Many years were spent pursuing a variety of career paths, including high school teaching and financial planning, but it wasn’t until she picked up a paintbrush that Kathy finally found her calling. Kathy also needed a creative outlet to counterbalance the struggles of rural life, which befell the farm with alarming regularity (combating droughts, wild dogs, and endless weed infestations was part of daily life).

Taking her first workshop in oil painting with Wolfgang ‘Bill’ Sass, Kathy found that painting didn’t come naturally: developing technical proficiency was something she had to pursue with dogged determination. With further tuition under seasoned realist painters John Wilson and Lyn Diefenbach, she honed her skills, learning to paint in both oil and acrylic, on canvas and linen.

Since this time, Kathy Ellem’s painting style has developed into a blend of photographic realism combined with dense painterly detail that only appears on closer inspection. Mark-making remains important to her creative practice — especially the act of ‘loading the brush’ with the right combination of colours, in which she often applies several unblended colours at once. Kathy believes that far more than colour, creating the right tone to express light and shadow, is the most important technical aspect of her work. On a deeper level, she believes that if she puts positive energy into her work as she paints, it will permeate the space where the painting is hung.

Kathy’s creative intent remains simple. The world we live in today is full of fear and anger. Rather than add to it, she wants to create works that balance that out. Kathy wants people to look at her paintings and feel uplifted; to feel a sense of joy. She also wants people viewing her paintings to feel connected to life in rural Australia in a positive way.

After 20 years in the Queensland ‘outback’, in 2015, Kathy moved back to North East Victoria with Chris and their two children, to settle on 1000 acres in the Greta Valley, farming beef cattle. Kathy has set up her studio in the farm’s original tobacco kiln; a space she couldn’t have imagined in her wildest dreams. With the family farm located across the valley from the old Kelly family selection, and surrounded by country that bushranger Ned Kelly knew like the back of his hand, the move to North East Victoria has seen Kathy adding the landscapes of ‘Kelly country’ to her creative output.

The subject of draught horses has also caught Kathy’s eye. Once settled on the new farm, she began pursuing scenes of ‘heavy horses’ at work, attending events like the Barellan Working Clydesdales and Heavy Horses Weekend, and Moora Working Draught Horse Muster. These animals have become her muse because they are emblematic of rural life. Kathy paints them to reflect on the values of hard work, and steady, calm strength, which ultimately draught horses symbolize for her.

In 2018, Kathy opened her own art gallery and workshop space, Kathy Ellem Fine Art, in the historic gold rush town of Beechworth. Having won the prestigious Australian National Equine Art Prize in 2017 (with an $8000 cash prize), and more recently, the Christine Drewyer Award at the Women Artists Of The West 48th National Exhibition (United States), she splits her time between her studio in Hansonville and exhibiting and running workshops in the Beechworth gallery and across rural and remote Victoria, New South Wales and Queensland.