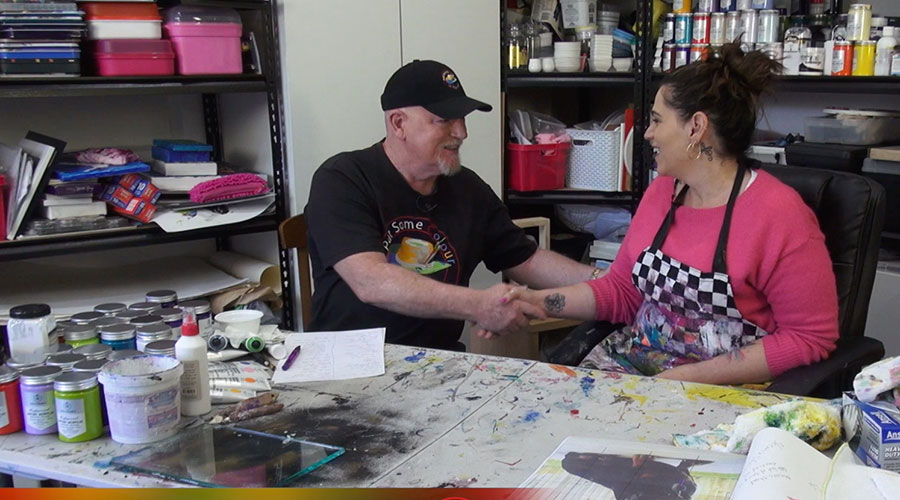 It all began for Justine Martin when she was living in Perth and became very ill. After 6 months of tests she was diagnosed with Remitting Relapsing MS in March 2011 and unfortunately had to stop work because of her disabilities.

Justine has some cognitive issues which include short term memory loss and can no longer count properly or multi task. Occasionally at times she has to use a walking stick or wheel chair. When her world crashed over 6 years ago she was forced to spend most of her days alone, not leaving the house or seeing anyone.

Wondering how she was going to fulfil the rest of her life. Her Neurologist suggested she pick a hobby. Justine Martin had always wanted to learn to paint but never found the time with raising a family and a career. Now all she had was time.

When she finally walked through the door of that first art studio her whole world just changed. Justine felt like she could express herself without even talking. Her friends and family were giving her wonderful encouragement.

Justine Martin was keen to find somewhere to learn more about art and meet like-minded people. She was like a sponge, wanting and needing to find out as much as she could about painting and drawing.

Justin started classes at a Springdale neighbourhood centre and also at Geelong’s MS Australia’s Social Support Day Program each week. It was around this time she came across our program (Colour In Your Life) on 31 and she would watch it for hints and tips. It all started to come together.

Justine Martin found herself enjoying what she was creating and shocked herself when she’d complete a painting. Justine couldn’t believe she had done that. She had dabbled with hobby ceramics 25 years ago and had studied music when leaving high school her only previous experience into the art world.

Justine Martin entered her first exhibition in the Drysdale Rotary Art Show in April 2012 and sold her first painting.

This then enabled her to go to town on buying different mediums for her home studio. She bought inks, watercolours, acrylic paints, graphite, pastels, oil paint, paint brushes, pencils, art paper, canvas and a SLR camera.

​Justine Martin has continued to enter exhibitions such as the State Trustee’s Connected art exhibition, IAN, Zonta, Royal Geelong and Melbourne shows, Rotary Art shows and has had three solo exhibitions at independent galleries. Justine Martin’s art has been bought around the world.

In 2015, Justine thought it might be a good idea to get some formal qualifications in the art world. She completed a cert 1 in creative industries and started her cert 3 in visual arts. Unfortunately, her MS decided that wasn’t such a good idea and she missed too many classes due to sickness that the college she was attending was no longer an option.

In the past 6 years Justine Martin has won some major awards for her art including:

“Never be afraid to put paint to canvas or ink to paper because you just don’t know how far it will take you to fulfil your dreams.”

You can contact the artist about their art tips or art techniques directly via their website at juztart.com.au