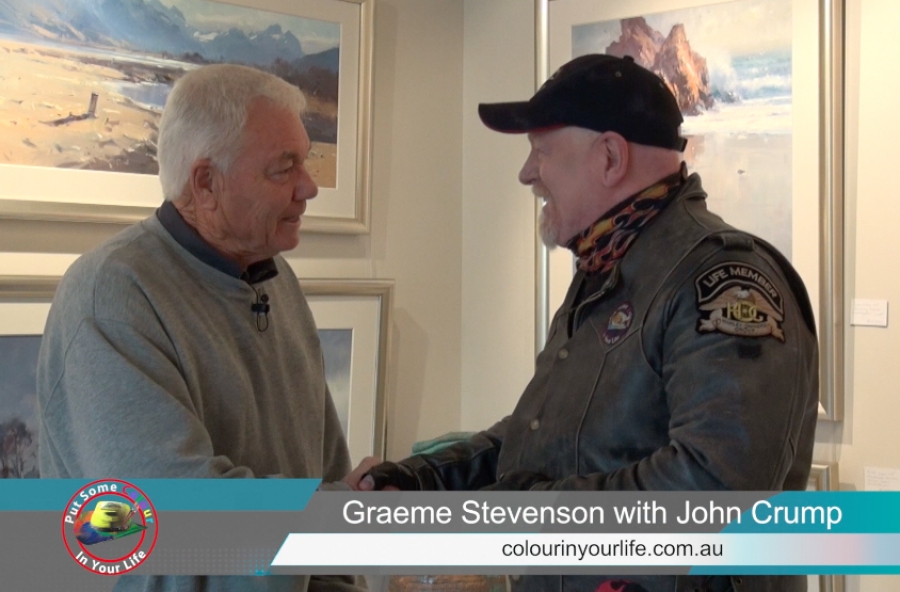 John Crump began to show an interest in drawing and painting in his very early years while growing up in Wellington, New Zealand. Encouraged by his parents, he pursued art as a school subject and after completing a year at art school, went out into the world of commercial art.

He realised that it was not the type of art that he wished to pursue and so he chose to go through training college and then into primary school teaching. Painting became a hobby during his teaching years but over a period, became his first love and so, encouraged by an award in the Kelliher art competition and a successful one-man exhibition, he began his full-time career as a professional painter.

Apart from brief diversions into other work, he has over the forty-two years since then, worked at the never ending task of improving his painting as he tries to express his love of the things we see around us – particularly the landscape, but also flowers and still life from time to time.

During the early years, he worked in the studio from sketches. However, he realised that his choice of subjects, colours, and designs were becoming repetitive and so, with encouragement from other painters, he began working ‘plein air’ to catch the subtleties of colours and tones, the mood of the moment, and the variations of design ideas that are best seen on the spot. Now, he enjoys spending most of his working time outdoors.

Being in the heart of mountain country has given John Crump an unlimited choice of subjects at his doorstep. He is also able to teach small groups of painters in the inspiring mountain valleys and favourite spots around Lake Wakatipu. When a change of subject is called for, the coastline is never too far away.

His paintings and written articles have been included in books and art magazines, he has held many successful one-man exhibitions and group exhibitions, and has taught adult students in art societies and polytechnic summer schools throughout New Zealand.

John Crumps works have been presented to visiting dignitaries from overseas and have been added to private collections, both in New Zealand and all over the world.