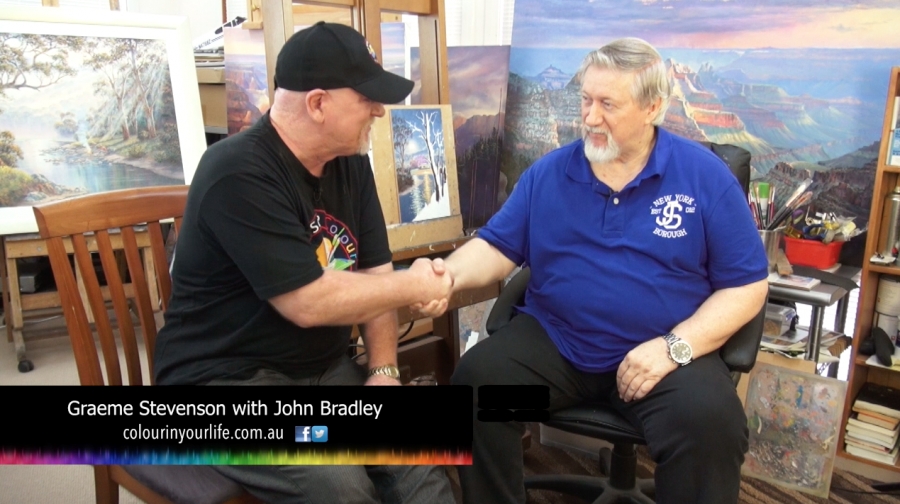 Born in Sydney in 1945, John’s early life was something of a Huckleberry Finn existence. Surrounded by large tracts of land, parks, and river, he was relatively free to roam during his schooling years. Exploring the surrounding areas extensively, he developed a love of nature in the process and a familiarity with many of its aspects.

John is recognized as one of Australia’s most versatile artists with subject matter including but certainly not limited to Australian landscapes and seascapes, early 20th-century street scenes, night scenes, misty morning scenes, sunsets and sunrises, locomotives, aircraft and ships, Blue Mountains and figurative work.

Completing his schooling, John went on to become an avionics engineer, a soldier, an aircraft inspector, and an electronic sales engineer before moving into a management career in sales, marketing, and advertising.

It was in his role as national advertising and marketing manager that John’s interest in art was strongly aroused once again. Working closely with advertising agency freelance artists and magazine editors he was often called upon to produce layouts in rough form or occasionally in finished art.

As a painter, John’s paintings depict the light and calm aura that one may feel the very first time that you meet him.

Inspired by his deep feeling for the rugged Australian landscape, he brings himself in every artwork that is produced using a wide range of colors to enhance the expressive stokes used in every painting he creates, making him one of the most published artists.