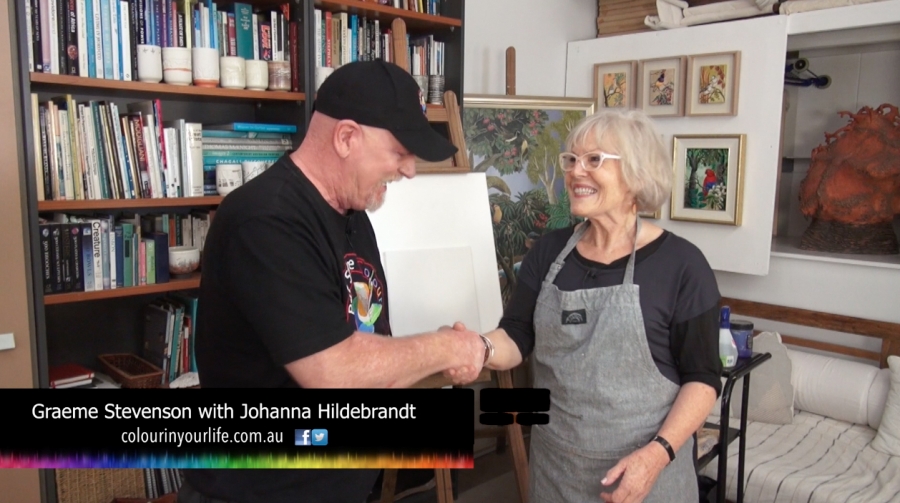 Johanna was born in a small town in the Alps in Southern Germany. After finishing high school, she completed a three-year course in sculpture and woodcarving in Oberammergau, a place famous for its woodcarving tradition and passion play.

In 1970 Johanna migrated to Australia, and after raising a family and assisting her husband in building his business, she started painting in 1980. Her first paintings were of her childhood memories, with nature and the four seasons represented in each picture. Initially, she began painting on glass panels, a more traditional way of painting in many parts of southern Europe.

Johanna began displaying her paintings in Sydney in the early ’80s, during the weekly Sunday Art Market in Macquarie St, outside the Botanical Gardens. Though she took part in group shows in Sydney, Johanna had her first solo exhibition in 1984 in Melbourne.

Some of the highlights of her career include a group show in London at Queensland House, a book launch in Paris, Japan, and Germany, as well as twenty-four solo exhibitions.

“My work is inspired by the Australian landscape. The canvas and clay surface offers me a platform to communicate my strong connection to nature. I am interested in the close link between visual input, emotional experiences and memories, and the way they leave tiny imprints on our subconscious. My artwork explores, expresses, and celebrates this concept.”  ~ Johanna Hildebrandt