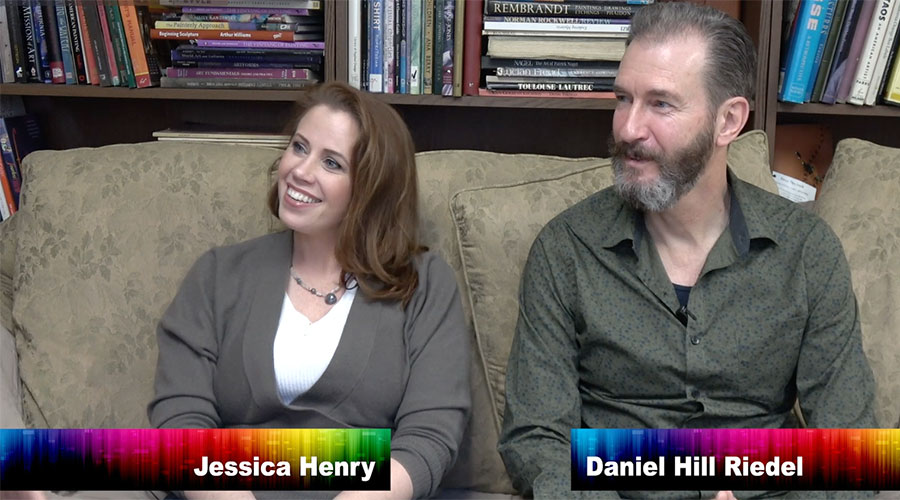 Read a little bit about Jessica Henry & Daniel Hill Riedel here and support our site by joining and watching the episode below.

Jessica Henry, founding partner heads Renaissance’s art instructional programs. She develops and designs courses, teaches classes and workshops and contributes to the creation of the videos and workbooks offered in the programs.

Jessica Henry’s oil paintings are described as “Classically Impressionistic”, while maintaining the discipline of her classical training, Jessica embraces the painterly approach of thick, rich brushwork and play of light throughout her colors- reminiscent of the Impressionists use of jewel- like colors to reflect light dancing. Whether Jessica is painting a poetic landscape, a mysterious still life or capturing a personality in a portrait, her work resounds with joyous light and sumptuous paint quality.

Jessica’s career in art began early. At fifteen she began serious oil painting studies under the guidance of Harvey Schroeder, of Elk River, Minnesota. At that time, she also began selling her work. In the spring of 1997, Jessica’s journey would take her to the Blue Mountains of Joseph, Oregon, where she became the owner and operator of The Joseph Art School. She maintained the school for a few years and quit the business in exchange for family life. Through the years Jessica’s life began to fill. Jessica’s work began to be more widely collected and sought after. In 2010 her work graced the cover of TOSCA magazine. Currently Jessica is working with producers developing a tv show called “Paint Your Adventure with Jessica Henry”.

In 2017, Jessica Henry relocated to Ohio and joined forces with Daniel Hill Riedel to develop Renaissance Creative Arts, LLC. This is a business devoted to teaching, inspiring and giving back to the world. More online art videos, art academy, and workshops will be offered through this venue.

Jessica Henry is a nationally recognized artist, having won numerous awards and honors. Her work has been shown and is eagerly collected from coast to coast and has been featured in many publications, including the December 2016 and 2017 issue of “Western Art Collector” as a featured artist in an articles, “Western Art East of the Mississippi”.

In addition to his nearly 30 years of marketing communications, advertising and design work, Daniel is also a fine artist, muralist, decorative artisan and illustrator.

Daniel Hill Riedel discovered his artistic talent and passion early in life growing up in Ohio. As a boy both of his grandfathers had a profound impact on his life—one a painter, wallpaper hanger and the other a printer—which ultimately influenced the direction of his work later in life.

After graduating from college, Daniel decided to pursue his art full time while studying in Munich, Germany. Returning to the United States he pursued formal art training at the Pennsylvania Academy of the Fine Arts, Philadelphia, PA.

His professional art career began as an illustrator. Daniel was also a member of the original faculty at City Center Academy in Philadelphia, where he taught studio and art history classes. At the same time he started The Graphics Guild, a printmaking studio. Daniel is also a published book illustrator: And God Said and Surviving College Successfully.

Since 1981 he has also worked in graphic design and marketing communications as a designer, director and consultant for numerous companies, and operating his own firm. His creative work spanned multiple media in those roles.

In 2009 he founded Riedel Decorative Finishing Company to Create Your Special Place! by creating unique artistic expressions on the surfaces of his clients’ living and work spaces.

See the fantastic online workshops they are offering through our website here.

You can contact Jessica Henry & Daniel Hill Riedel about their art tips or art techniques directly via their website at renaissancecreativearts.com.