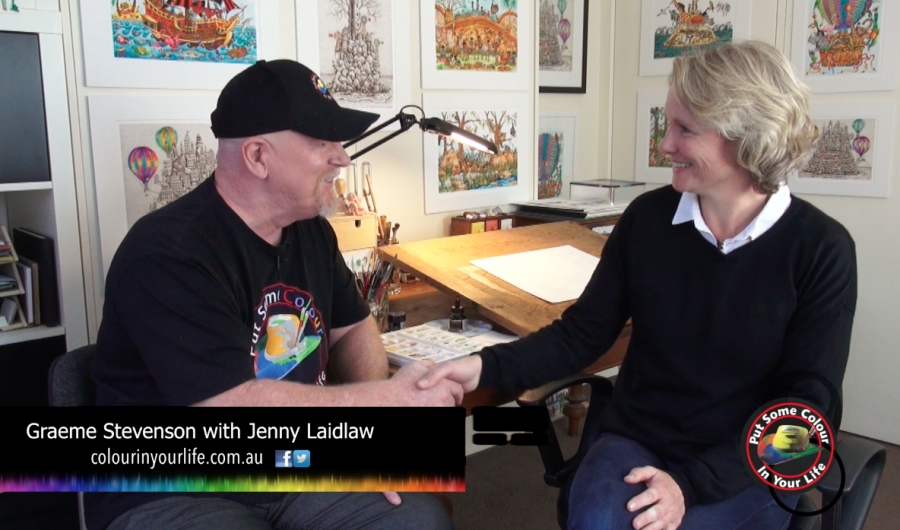 Born in Melbourne in 1969, Jenny began painting and drawing at an early age. When her family moved from Melbourne to North East Victoria in 1981 she developed a passion for the high country and a lifelong love of the outdoors.

Completing school in 1987, Jenny then studied a Bachelor of Visual Arts at the Canberra Institute of the Arts, Australian National University. In 1992 she was accepted into Bachelor of Arts Honours-Fine Art at the Latrobe University College of Northern Victoria.

Jenny traveled and worked extensively overseas before being wed in 1997. In 2002 she moved with her young family to the coast town of Jan Juc, Victoria. Jenny is now a full time artist, mother and wife, though not always in that order.

Her love and passion for the ocean and mountains have been the inspiration for many of Jenny’s works. In her finely detailed pen and ink drawings with collage material, the viewer can put together all the elements like a jigsaw puzzle to learn the story behind each picture. Some of her works have even been made into jigsaw puzzles for children.

Jenny loves blending realism with surrealism, and each world she creates is ‘collected’, telling a story of a nearly mythical landscape and history. It is her hope that each piece will inspire the viewer to contemplate his or her own relationship with their environment.

By including a dose of fantasy in some of her works, she invites the viewer to examine more closely, to establish where the line is drawn between fantasy and fact. Jenny’s works are the result of many hours spent gathering collage and reference material and her love and passion for the outdoors whether it be ocean and beach or mountains and bush, makes this an enjoyable task.

Recently Jenny has been spending more time doing illustrations for children… whether for a bedroom or playroom. Her works are vibrant, detailed, colourful and whimsical. The inspiration for many of these works has come from seeing the world through the eyes of her young daughter.