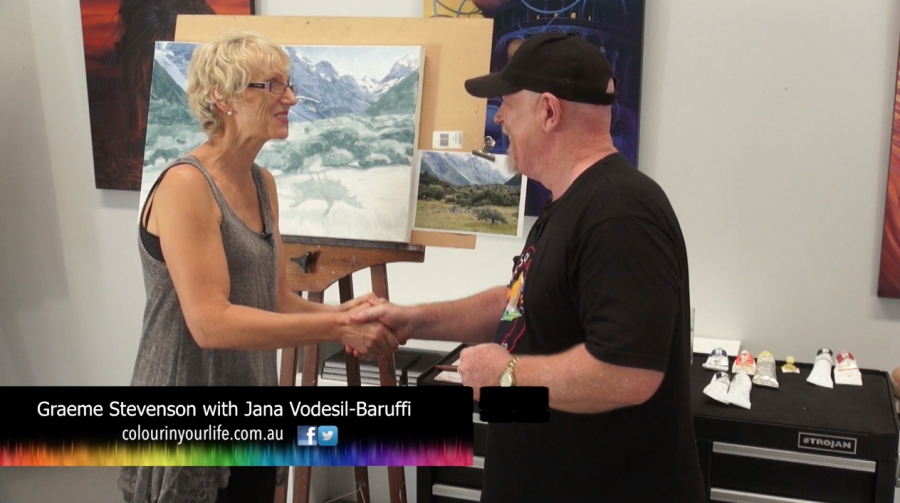 Jana Vodesil-Baruffi was born in Czech Republic in 1957. In childhood Jana developed a keen interest in art and sport. These two interests followed her throughout life. After five years of study Jana graduated as an interior designer. Drawing was part of her daily routine.

In 1981 Jana emigrated to Australia, where she immediately immersed herself in art, and focussed on gaining skills in copper enamelling, china painting, watercolours, and fabric printing receiving tuition in the private studios of various artists and at technical college.

In 1984 Jana held her first solo exhibition of china paintings, copper enamellings and ceramics in the private studio of her art teacher.

In 1987 her work was selected among 30 WA artists to exhibit at Matilda Bay Art Award.

In September 1989 Jana held a second solo exhibition of pastel paintings in the Gomboc Gallery.

Jana Vodesil-Baruffi’s work has been featured many times in magazines such as Homes and Garden, the Building and Design Yearbook, the Finishing Touch and the West Australian Newspaper. She has also published many articles on the subject of decorative art. On several occasions Jana has won the craftsman’s awards in the Homes of the Year competition for her murals.

In 2001 Jana decided to step off the ladder and scaffold and share her knowledge of art through teaching in her studio at 24 Yampi Way in Willetton.

In May 2005 she held a solo exhibition at Atwell Gallery in acrylics, oils and pastels in a realistic and illusionist style.

In 2006 Jana also won the oil category of The City of Canning Art Award and was a finalist in the Shirley Hannan National Portrait Award.

In 2006 Jana Vodesil-Baruffi won the Peoples Choice Award with portrait of Peter Kennedy in the inaugural Black Swan Portraiture Prize.

In November 2006 Jana held another solo exhibition “Life, Death and In Between” at St. John of God Hospital in Subiaco. This exhibition marked a change of the direction of her art, moving from Realism to Fantastic Realism.

In 2008 Jana hold a solo exhibition in Linton and Kay’s Fine Art Gallery in Subiaco featuring her Fantastic Realism.

In April 2009 Jana undertook a year’s sabbatical, painting in Italy, embarking on a new adventures and letting the Italian culture and landscape inspire her. In October that year she held a one month solo exhibition in Arezzo, a town that typifies Tuscany and later in Sondrio in northern Italy and participated in several group exhibitions.

The year 2009 marked Jana’s first Art Tour, which took place in Italy’s Tuscany region, with 28 participants. Since then Jana has facilitated another three Art tours to Tuscany, two to Czech republic, Cinque Terre, North Italy, Lake Como and mountain region, Sicily and Amalfi Coast and New Zealand. The tours explore history, culture and the beauty of nature combining art demonstrations and plain air painting and are suitable for artists, students as well as their partners and friends. May 2015 will see new destination for the Art tour – South Africa and there are many other destination planned for future years.

In May 2010 Jana’s paintings featured in the Out From Down Under and Beyond exhibition in the Agora Gallery, Chelsea, New York.

The opening of the Metamorphosis Art Gallery in March 2011 presented Jana with new possibilities to help and encourage new, upcoming and established artists to promote and display their work. The gallery also provides Jana with an amazing space to exhibit her art.

Visiting other art groups to do art presentation and demonstrations, teaching art from her beautiful studio and taking groups of artists and their partners to Italy, Prague and NZ to paint and explore, is one of the most enjoyable and satisfying experiences in Jana’s life today.

In 2012 Jana was successful for the 4th time in being selected as a finalist in the prestigious Black Swan Portraiture Prize.

Jana Vodesil-Baruffi is a regular contributor to the Doug Moran, Archibald and Black Swan portraiture competitions.