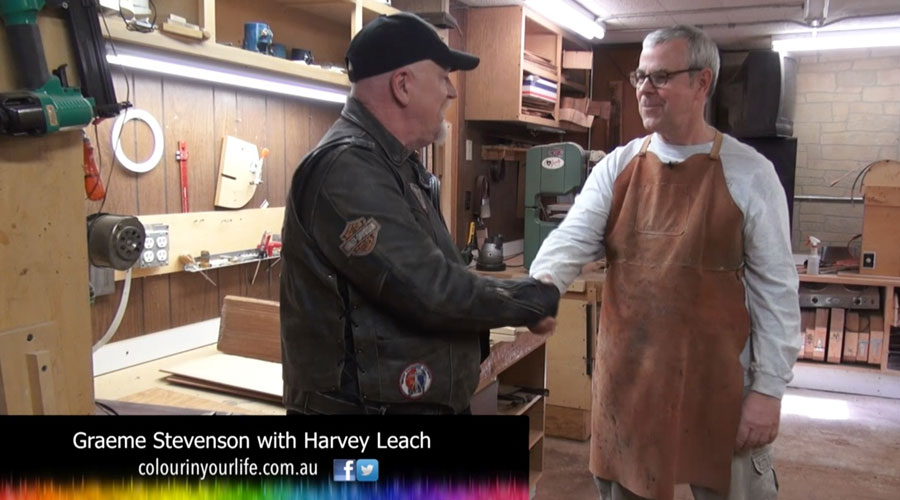 Featured artist Harvey Leach appeared on Colour In Your Life Season Twelve (12). Read a little bit about the artist here and support our site by joining and watching the episode below.

Harvey Leach cut his first inlay when he was in high school. Harvey’s first “inlay” was actually a cavity in the shape of a heart in a banjo fretboard, made from an ill-advised cherry. Rather than actually cut something to fit he simply filled the cavity with Plastic Wood… Harvey has come a long way since!

Harvey got his real start with inlays while he was trying to build banjos for a living… everyone knows you can’t build a banjo without encrusting it with a fair amount of shiny secretions from the ocean floor! His first attempts were with the mindset that if he couldn’t play better than everybody else, he could at least look cooler. It was a great plan, but at his very first contest a guy by the name of Steve Arkin showed up with a banjo he had built, which looked remarkably like his… Steve won the contest and Harvey didn’t make the finals. Steve had been at it a bit longer and had played with some guy named Monroe in the early 60’s… his first name was Bill…

Harvey still has that banjo, and as he looks at it he sees how far he has come from the good ole days where covering as much space as possible was a priority, to now, where it’s more about seeing how much detail he can fit into the smallest possible space. Harvey’s style has slowly evolved into one where he likes to see just how realistic he can make things look. He calls it photo-realistic, but has been told by artists who smear around the limitless color combinations of pigments that to be “photo-realistic” it has to look just like a photo… la dee dah!

Harvey’s pallet of colors is much more restricted, so he guesses that’s never going to happen. He can’t come up with a thousand shades of blue and then blend them to smoothly transition. Heck, he’s lucky if he can find a half dozen materials that are different shades of blue! So therein lies the greatest challenge in “photo-realistic” inlay; finding the right materials to match the colors and textures you are trying to create. Since more often than not that material doesn’t really exist, Harvey spends a lot of time making his own material by creating mosaics or custom blending things like jewelry grade epoxy or even a kid’s favorite, Sculpy clay.

As you look through Harvey’s website you will find several detailed explanations of how some of these processes take place to create the near “photo-realistic” effects that set his work apart from most other inlay artists.