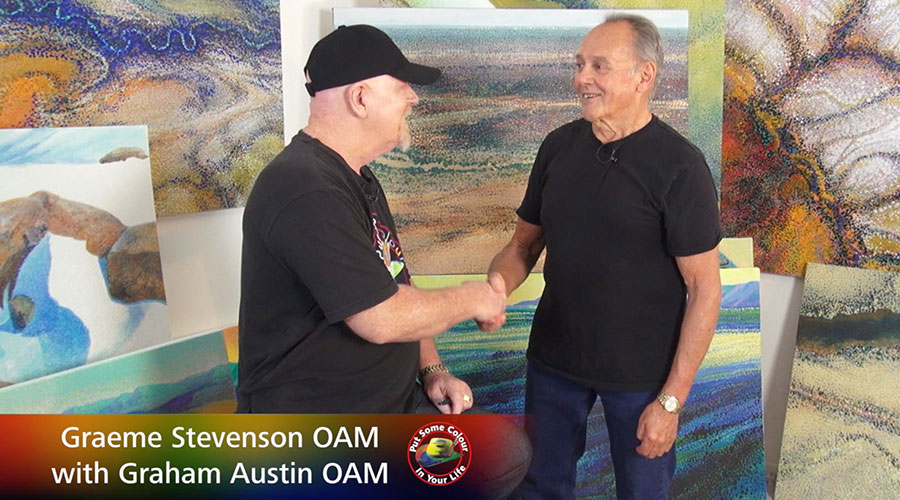 Graham Austin OAM has been subconsciously influenced from his first time in the air. It was a seaplane joy flight whilst on holidays down the south coast of NSW at seven years old. The images were quite astounding, and something he would never forget.

He saw the landscape made up with spots, dots and dashes. Rolling surf looked like cotton wool rolled into stringy strips. Trees were spots; there was a sense of primitive design to the landscape.

Graham was caught up in the youthful exuberance of taking off from a small lake, experiencing the giddy excitement of a first time adventure in the air, absorbed in wonderment and then thrilled with the pilot’s skill in landing the craft back on the small lake.

On one of his flights, he witnessed a misjudgement where the pilot overshot the lake whilst landing and slid from the water up onto the sand. Unsurpassed excitement for Graham as a child, but also with a sense of relief it didn’t happen on his flight.

In later years, driving around Oberon in the Blue Mountains and looking down into the valley, his childhood flight experience was rekindled.

Graham started painting elevated views and discovered working from photographs was generally quite inhibiting. The camera doesn’t capture the soul of the landscape and it ignores that emanating spirit, whereas memory and imagination does.

Graham feels he has to understand how the ground surface is washed and blown by nature, creating the earth’s wrinkles and suggesting its subjective, emotional response. In Graham’s case, by incorporating a gallimaufry of spots with a sense of organised chaos.

Oddly enough, when spots are not placed in the right places the picture looks incredibly wrong, the rules of perspective cannot be ignored.

The main influences on Graham as an artist now are the marvellous effects of aerial landscape and the sense of spirit emanating from the landscape patterns that, conjointly, emanates from the spirit.

Graham paints in spots, in a style akin to the pointillists but he is more interested in creating a spotted abstraction on close inspection, that fuses into reality when viewed from a distance. The main themes and subjects of his artworks are mostly the abstracted creation of landscape where water and wind carve the design, sculpting the moving surface.

He likes the sense of rocks and trees becoming spots, sometimes standing alone and sometimes gathering in groups just like people, intermingling in life and becoming a tide of movement, a current of aerially viewed patterns juxtaposed in perspective.