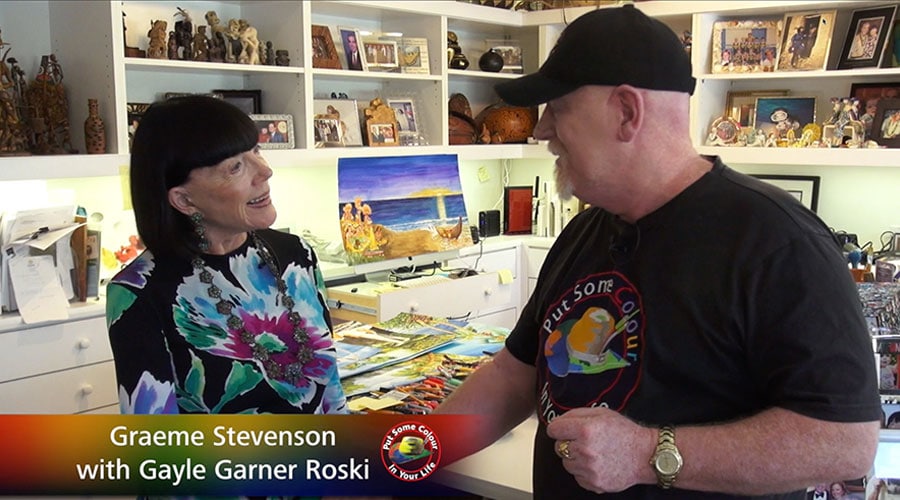 Watercolor, according to Gayle Garner Roski, is a “medium of magic.” With watercolor you never know exactly how it will come out, as you cannot rework what you have already done, she explains.

“I love watercolors because they have a way of being unpredictable, and yet they can transform us by taking an instant of time and holding it still, so that we may reflect on it and be moved by it.”

A plein-air watercolorist and avid world traveler, Gayle Garner Roski has explored some of the most remote parts of the globe, always with paints and sketchbook in hand. She dives the uncharted waters off New Guinea and has climbed to the summit of Mt. Kilimanjaro. “One of the great joys of travel is seeing how creativity is expressed throughout the world: connecting to the arts and artisans of different cultures is a profound inspiration.”

She has created several series of paintings from objects found in her travels around the world: calligraphy brushes from Beijing, Italian pottery from Tuscany and Umbria, and a snuff bottle from China. In 2014, she created a Zulu basket painting that won the Jesse Arms Botke Award at California Art Club’s 104th Annual Gold Medal Exhibition.

Gayle Garner Roski has illustrated five books: Luscious, the University of Southern California’s cookbook; Thomas the T. Rex: The Journey of a Young Dinosaur to Los Angeles, written by Michael Smith; Mei Ling in China City and Mystery of the Giant Masks of Sanxingdui, both written by Icy Smith; and Endeavour’s Long Journey, written by astronaut John D. Olivas.

You can contact the artist about their art tips or art techniques directly via their website at gaylegarnerroski.com