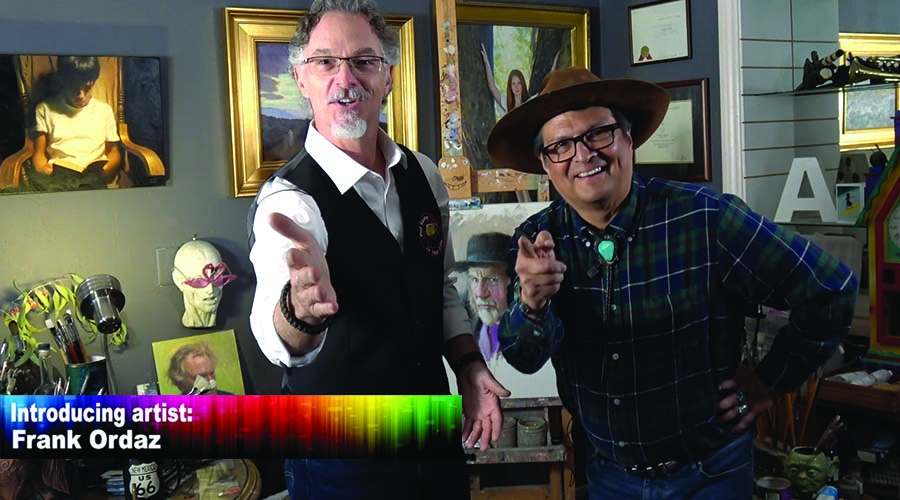 Frank’s story really starts in East L.A. His bedroom was in a small living room and he was awakened one evening to shouts below the family house. As he looked out he saw two men fighting with chains. Frank was shocked and repelled by his environment. His backyard was dusty dirt with a tree that bore no fruit. His most vivid escape was when he saw a vine flower and remembers bees swarming around the petals getting drunk on pollen. It was then that Frank decided he too wanted to feast on something beautiful and nourishing. If he was to sit on a shrink’s couch he would say that Art probably saved his life and gave him a traditional healthy escape from the ugliness that he saw. Frank remembers someone giving him a set of casein paints when he was ten, because they saw him drawing all the time with cheap pencils. He painted his mother looking into a mirror while touching her face as she noticed her wrinkles. People made a fuss about it when Frank entered the painting in a local show. If not for the encouragement of so many people like his parents who believed in him, Frank would probably be a machinist like his father. Painting is really the only passion that ever made him want to get out of bed and do something significant and meaningful. Frank Ordaz studied with a portrait master during his teens and one day he met an old salty California Plein Air painter named Sam Hyde Harris. When he stepped into Sam’s darkened living room he was seated on a worn sunken couch with a stick of tobacco in his mouth.  Behind him hung a Saturday Evening Post original oil painting by Norman Rockwell. It was signed “to my good friend Sam”. It filled Frank with a sense of calling and purpose and he was hooked.

When you’re a poor kid your ticket out of poverty is usually Sports, Education or the Arts. Frank’s dad was a semi pro boxer, but Frank wasn’t a strong kid, so he started getting into drawing and thought that if he could keep drawing he could make it in the world. Frank was fortunate enough to have a father who appreciated art and valued the arts. His mother did too, and it was a real gift from God. Frank’s parents have always supported him. He has heard other artists complain that their family argued against a career in Art but he has never heard this from his parents. Frank was also told by them that he had a gift from God and that he should pursue and hone his talent. By the time Frank was 7, 8 or 9, he had already decided in his head that he was going to pursue art. Frank has been persevering and abiding ever since.

Frank Ordaz never thought the “Artist Statement ” was a big deal until he had to find his voice as an artist. Certain subject matter and places attract him over and over again.  Why? And who and what are his influences, and how has that shaped his vision and voice?  For one, growing up in East L.A. he dreamed of far away places across America and he wanted to travel and experience the romance of the Grand Canyon and Yosemite. Frank’s escape was television, especially movies that were about exotic places. His earliest recollection was watching “The Lost Horizon” and being transfixed by the lure of the Himalayas and the adventure to other lands and peoples. When he paints landscapes,  he is looking to find the essence and the spiritual qualities of popular American vistas. Working at Lucasfilm shaped Frank’s vision in capturing a larger than life cinematic moments in a landscape. There is a challenge in painting popular vistas. Since many people have seen the same location, there is a shared reality in memory of the condition of Light and Space. Above all, Frank Ordaz wants to capture the elusive quality of light .

“Be bold and courageous. Fear not. Also, a sense of adventure has always been a big help to me. People ask me to do things all the time, including people I’ve just met, and they are surprised when they ask me to go on an adventure and I say yes. Painting adventures and this or that. Just be open to new experiences as opposed to being closed off. That’s something I try to live by. Travel to Europe and see the great Art Museums. It will change and inspire you that we are continuing a great and wonderful tradition..I think that’s important too. Also, what will be the legacy that I will leave behind for not only my children but for society as a whole. Just like that Bougainvillea bush, I want to give off life and hope…. by the grace of God go I.”