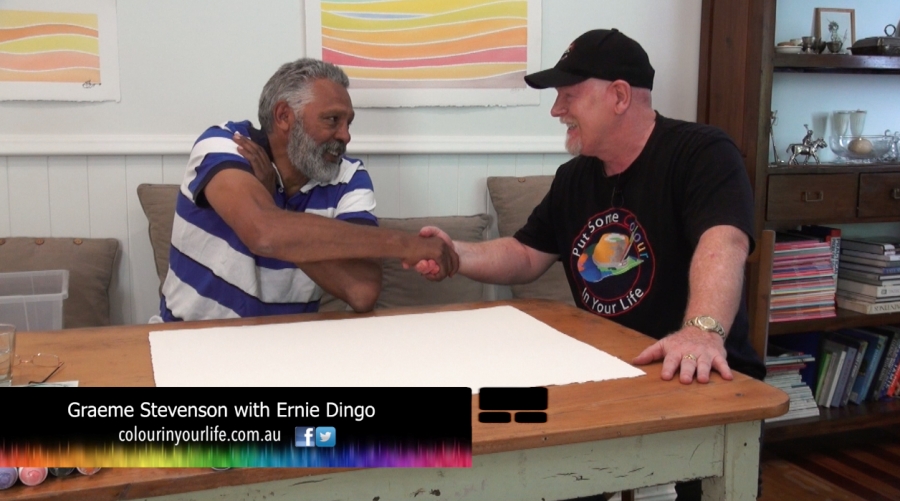 Born Ernest Ashley Dingo on 31 July 1956, at Bullardoo Station, Ernie was the second child of nine, with three brothers and five sisters. He grew up in Mullewa, Western Australia with his family, and originates from the Yamatji people of the Murchison region. He went to Prospect Primary and then Geraldton High School.

Ernie Dingo came to acting after moving to Perth and meeting Richard Walley. With a distinguished career as an actor and presenter in film and television, Ernie also promoted the Generation One ‘Hand Across Australia’, which was a promotion for Indigenous equality. In collaboration with Richard Walley, he also created the controversial ‘Welcome to Country’ ceremony in Perth in 1976, after dancers from the Pacific Islands would not perform without one.

Ernie Dingo’s film career began in the early 1980s and he appeared regularly on screen through the 1990s. He appeared in Bruce Beresford’s 1987 drama ‘The Fringe Dwellers’ and worked on the 1988 docu-drama biopic ‘Tudawali’. He had a major supporting role in the international comedy blockbuster ‘Crocodile Dundee II’ in 1988. He appeared as himself in the 1989 comedy ‘Capuccino’ and had a major role in the 1991 Wim Wenders film ‘Until the End of the World’. In 1993 he starred in ‘Blackfellas’ and he had a lead role in 1996’s ‘Dead Heart’. In 1998 he starred in ‘Somewhere in the Darkness’. In 2010 he returned to the silver screen with a role in the Aboriginal musical ‘Bran Nue Dae’ along with Jessica Mauboy and Geoffrey Rush.

Ernie Dingo has hosted the television program The Great Outdoors since 1993, also appearing in many Australian television series such as Blue Heelers, The Flying Doctors, Heartbreak High and Rafferty’s Rules. He appeared in the TV mini-series’ The Cowra Breakout (1984), A Waltz Through the Hills (1987), (for which he won an AFI Award for Best Actor in a Television Drama) and Kings in Grass Castles (1997), as well as co-starring with Cate Blanchett in the Australian television drama series Heartland.

In 1990, Ernie was made a Member of the Order of Australia, in recognition of his service to the performing arts.

Despite his extensive film and television career, Ernie’s other passion lies in art, being able to express himself and his journeys in life through creative means. Through painting, Ernie expresses his love for his Aboriginal culture, the memories of his people and country. Each Horizon painting tells a story of places unknown and journeys to be taken.