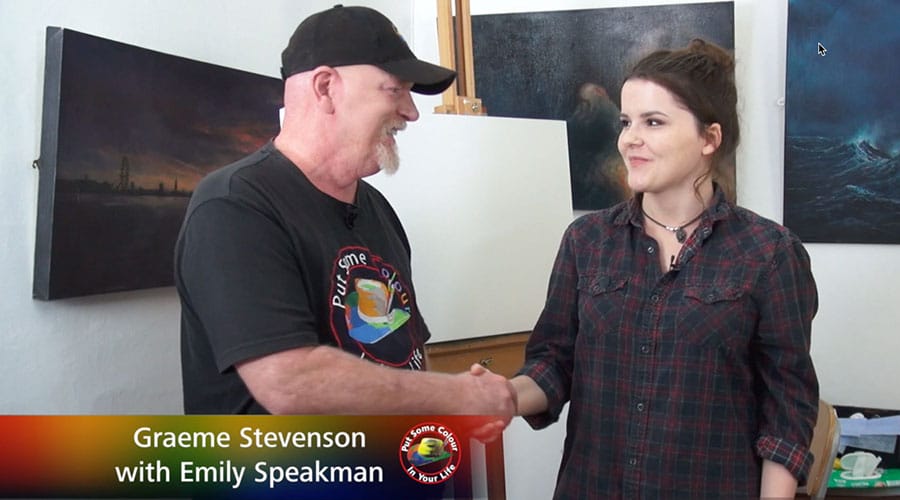 Featured artist Emily Speakman appeared on Colour In Your Life Season Fifteen (15).  Read a little bit about the artist here and support our site by joining and watching the episode below.

Emily Speakman is the youngest ever artist to be filmed on Colour In Your Life. She is 18 at the time of filming and has already achieved so much. We can’t wait to see this artist as she develops even further.

From a very young age, Emily displayed a flair for art that was beyond her tender age. It was when Emily was 12 years old that her talent for oil painting presented itself and she hasn’t stopped painting since! Her talent has led her artwork to be exhibited at the Tate Liverpool and to be used as the front cover of books.

In August 2011 at the age of 12, Emily made her first sale while painting in front of house visitors at Erddig Hall. Later in May 2012, at the age of 13, Emily exhibited at the Virgin Art Exhibition in her local church where all of her work sold within 24 hours! The biggest reward for an artist is when someone wants to buy their work, she was so thrilled!

Later in February 2013, Emily Speakman entered the ‘Artist of the Year 2013’ competition with the SAA (society for all artists), where she won the ‘Best Junior in the Seascape, boats and waterscape category’. This was a huge honour for Emily as it meant her work would be on display at the ‘All About Art 2013’ event in London.

In September 2013, Emily entered her artwork into the Wrexham Open competition at the Oriel Gallery, to her delight she not only won ‘Best Young Artist’ but also won ‘The People’s Choice’.

In January 2014, Emily was invited to become a member of A.C.O Galleries which is a non-profit co-operative of artists who formed to promote the work of its members by staging self-funded exhibitions. The artists’ consist of some of the best the North has to offer who are driven in their determination to support each other.

In August 2014, Emily’s painting ‘Space’ was selected for exhibition at the Tate Liverpool which is one of the largest contemporary art galleries outside of London. Emily has also supported numerous charities such as Nightingale House, RAF Benevolent Fund, Clatterbridge Cancer Research, Parkinson’s UK and The Jon Eggin Trust.

You can contact Emily about her art tips or art techniques directly via her website at https://www.emilyspeakmanart.co.uk