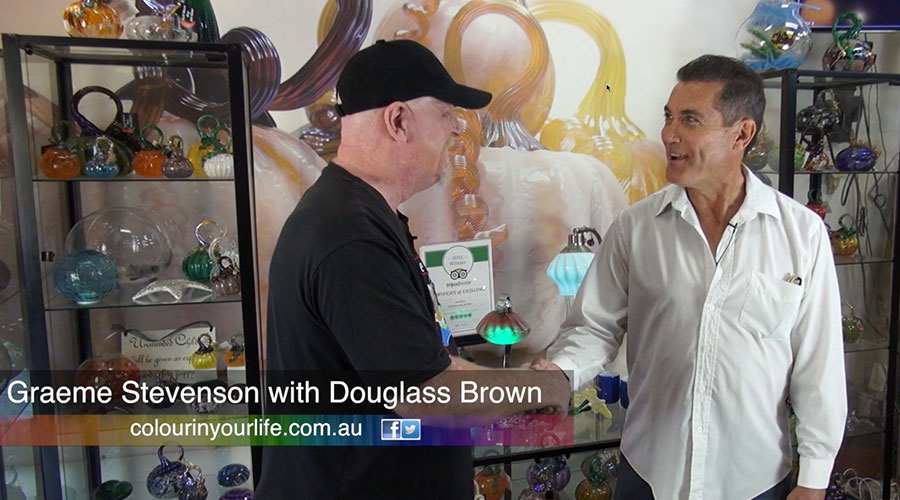 Douglass Brown grew up in Silicon Valley, California at a time when companies actually made the chips there instead of designing and having them made elsewhere in the world. Doug’s first job in high tech was washing diffusion tubes, the 7 to 8 foot long test tube looking chambers where vapors are deposited onto the chips. They had a glass blower that would come in to fix broken glass at the facility. Doug kept him busy!

Douglass Brown found himself at 23 young traveling in Europe, living off the proceeds of a sale of a property he had owned for a short time. He had just gotten off a tall ship in Jersey and stumbled into a cafe in St Malo France that took his breathe away. Deeply carved, sand blasted glass in large format widows depicting sailing ships was too hard for him to resist. Doug studied them and promised himself he would return to the states and do this art!

So he did! Doug learned as much as he could from everyone he came in contact with. He got lucky and developed a relationship with a contractor that was doing a lot of commercial work in casinos in Nevada and ended up doing work throughout the world with his help. It was a great time in his life as family life came into play. He put his glass art career on hold and pursued what he needed to do.

It was during this time that Doug took his first job working glass at a laser fabrication company. Doug started working with quartz glass to fill in the time between artistic jobs with high tech glass jobs. The material is amazing because of its lack of expansion and ability to withstand thermal shock. Its high temperature is more like welding steel than what he does today with the glass he works with now.

Doug’s specialty is his famous, hand blown colorful Half Moon Bay glass pumpkins and Jellyfish lamps. Every single one of these incredibly beautiful creations is uniquely different.