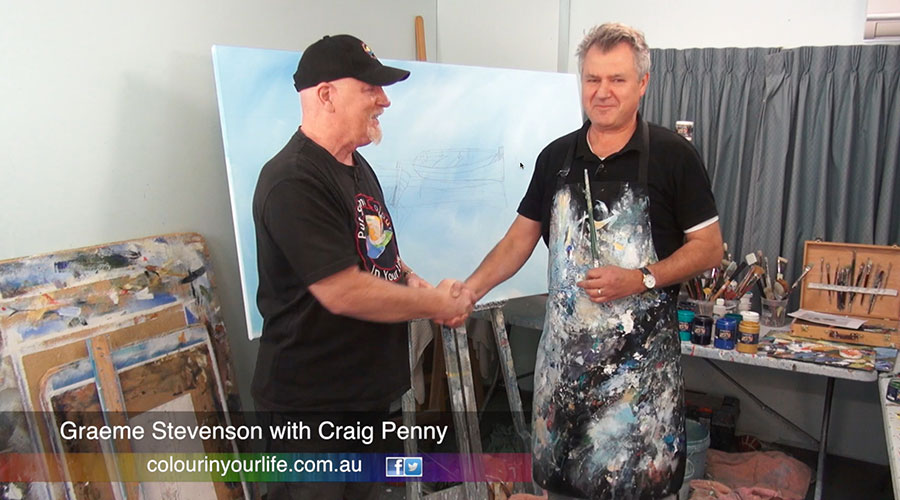 Featured artist Craig Penny appeared on Colour In Your Life Season Fourteen (14). Read a little bit about the artist here and support our site by joining and watching the episode below.

Born in Mildura, Craig Penny has shown an interest in art and drawing from a very young age and has created a successful career as a professional artist.

In 1970, the family moved to the Western District of Victoria, and Craig’s love of art and artistic interests extended into ceramics and sculpture. Craig has constructed several wood-fired kilns for this purpose. You could say “it fired his imagination”.

Studying art at Ballarat University, painting and graphic design claimed most of his attention, allowing him to pursue a successful career as an illustrator and as a member of the Illustrators Association of Australia for many years. Craig has skills in a range of mediums, including computer graphics. He taught both traditional drawing, illustration, and digital drawing at both Victoria University and Swinburne University.

In 2001, Craig had his first major solo exhibition in Mt Eliza, Victoria. There have been many exhibitions and awards since. Craig’s work has been accepted by Galleries around Australia, Singapore, SE Asia, and California USA, as well as many private collections and remains
in strong demand today.

“I like to think that to paint a successful painting is not so much to have tamed the beast, rather to have been taken along for the ride and still be there at the end of the experience. For me, painting is like life… giving yourself enough skill, knowledge and integrity and then letting yourself free to take what is thrown your way. You don’t need to tame and control it for magic to happen… you just need to be there at the end.”
~ Craig Penny