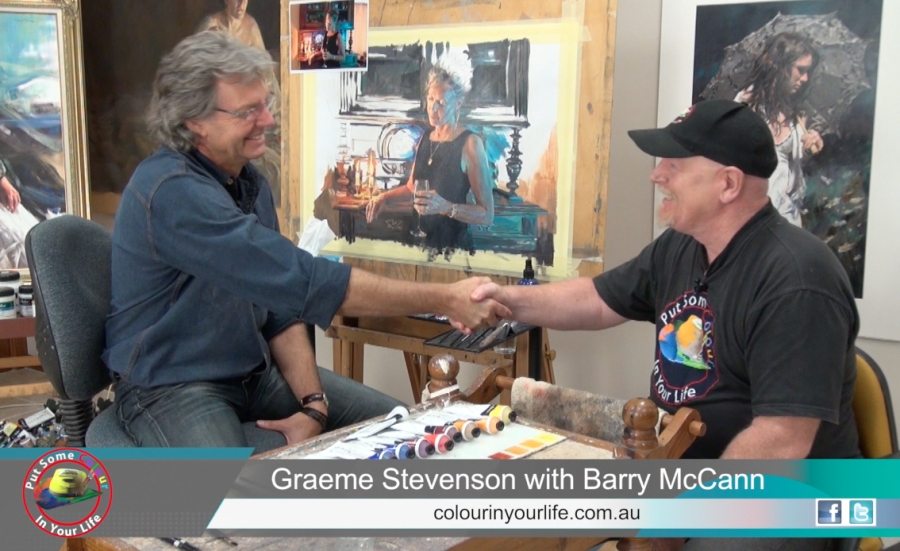 Featured artist Barry McCann appeared on Colour In Your Life Season Seven (7). Read a little bit about the artist here and support our site by joining and watching the episode below.

Barry McCann was born in 1962 in Armidale, NSW, Australia, where he now lives with his wife Lucy, also a full-time artist. Together they run McCann Fine Art, producing, selling, and teaching art. He is the recipient of numerous awards and prizes and his works hang in collections around the world.

Barry’s interest in art began with his love of drawing as a young student presenting school assignments with more illustrations than text and developed further as a young adult during his college years. Drawing became a way of gaining some pocket money and new friends.

His artistic interest and flair became very advantageous with his chosen trade as a Chef and Cake Decorator, but it wasn’t until he enrolled in an introductory Watercolour course at the Canberra School of Arts, A.C.T. that his appetite for art really began. Armed with an insatiable thirst for art knowledge, he stumbled upon a book about the life and works of artist John Singer Sargent and this has influenced his work and artistic vision ever since. He has studied with many leading artists in their field in order to build on his skills and in 2000 he began painting as a full-time career. Barry’s love of art has taken him to some of the best museums and art galleries in the world where he draws constant inspiration.

His subject matter usually involves an animated object with a dramatic light effect and enjoys the constant challenge of trying to portray the illusion of both movement and form with a narrative theme. The pursuit of conveying beauty in his work is paramount. He believes that art is a visual language and should need little explanation… you should just like looking at it. Finding the middle ground where traditional representational art can be fused with a more modern look is something he strives for. His work usually portrays a traditional scene and is painted using loose edges, obvious brushstrokes, dribbles, spatter, or “movement lines” all of which are used in contemporary art practices.

Barry would like his viewers to not have an opinion of his work, but a connection or a response.