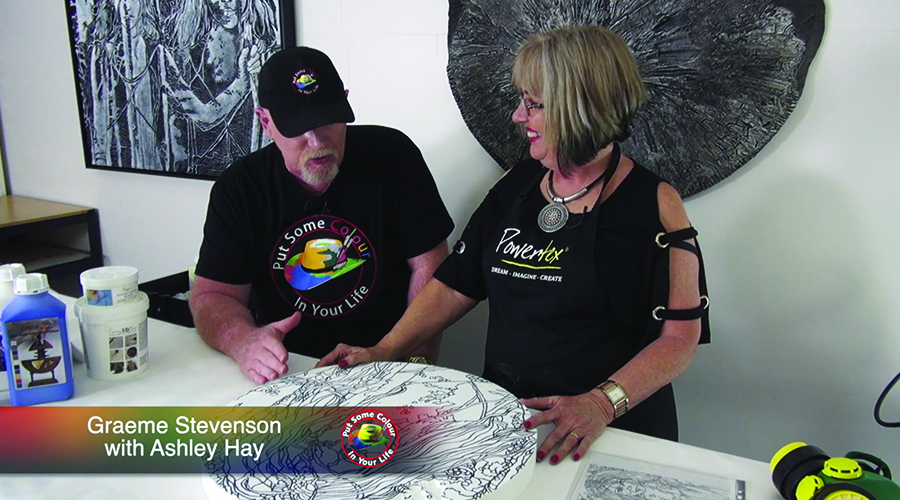 Ashley Hay was born in Scotland, moving to Australia as a child in 1968 with her family, she has always called Australia ‘home’.

Raised in the southern suburbs of Perth Ashley has pursued her love of art from a young age. Her passion for drawing and painting flourished during her teenage years as a student of Special Art, at Applecross SHS. Graduating with the Art Award, she went on to Curtin University where she completed a Bachelor of Arts majoring in Painting and Sculpture. Ashley furthered her studies with a Diploma of Education and a Certificate IV in Training and Assessment.

Since her early years Ashley’s artwork has been based on a felt, intuitive response to the environment, or her subject, to capture a memory or sense of ‘place’. Working in a contemporary, expressionist style Ashley has experimented with a diverse range of mixed media throughout her artistic career, developing an extensive visual language of alternative art surfaces and rich textures that she utilises in her studio work. The tactile nature of the materials, her hands on approach, focus and energy helps her to re-capture the sensory experience of ‘being’ in the moment and feeling ‘connected’ with her work as she’s creating.

“My artwork is a felt, intuitive response to the environment, capturing the mood of a subject and the memory of how it ‘feels’ to be in the moment, in awe of the light and beauty of nature. I enjoy re-creating a sense of peace and rest… like opening the curtain on the theatre of life”.

Ashley Hay also enjoys painting outside, en Plein Air, working in a more realistic style to capture the light and immediacy of the moment. The discipline of observation, playing with form, light and colour, in a composition, combined with technical application informs and complements her studio practice. As a member of the Mandurah Plein Air Artists she has been the President for two years (2017-2018). This year Ashley is focusing her studies on life drawing and portraiture, as well as continuing painting en plein air.

Ashley’s recent exhibition “Tree Stories” captures a sense of ‘story’ and ‘place’ in celebration of nature. These works are more narrative, communicating her inner thoughts and feelings. As part of the exhibition Ashley has written prose for some of the artwork and created a video that tells the story behind the exhibition (see link below). Ashley’s intention in doing this, is to demystify the creative process and make it easier for the viewer to understand the artwork. Her hope is that something of her story connects with the story of the viewer, enhancing the meaning and resonance of the work.

Combining her love of Art and Theatre, Ashley Hay is also a passionate advocate for Wearable Art; as a two time finalist of Wearable Art Mandurah, she has been involved with all aspects of the competition including the Showcase, campaign shoots and various exhibitions. She has had the opportunity to speak at many schools and tertiary institutions, including the Karl von Busse (KVB) Institute of Design, Sydney. Over the past three years Ashley has conducted the popular workshop, “Creating Sculptural Form for Wearable Art” and has been on the judging panel for the competition (2017-2019).

As well as maintaining her own art practice, Ashley is the Australian Importer for Powertex, facilitates art workshops throughout Australia and is passionate about inspiring others to create.

You can contact Ashley Hay about her art tips or art techniques directly via her website at ashleyhayart.com or at powertex.com.au.