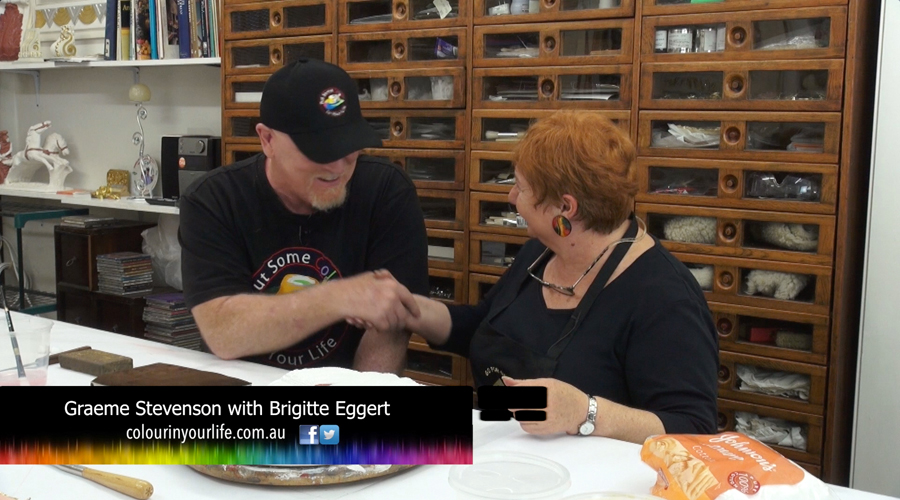 Featured artists Karl & Brigitte Eggert appeared on Colour In Your Life Season Eleven (11) to talk about Art Gilding. Read a little bit about the artists here and support our site by joining and watching the episode below.

The ancient craft of Gilding finds revival in the 21st century. Karl is a Master Gilder who trained as a church restorer and gilder in Cologne, Germany. Art Gilding was founded by Brigitte and Karl Eggert in 1976. Their company has undertaken literally hundreds of significant projects in Australia, Europe, and Asia. To name just a few of their projects: NSW State Parliament House the Sydney Town Hall, the Shangri La and Intercontinental Hotels in Sydney. In the Petronas Twin Towers in Kuala Lumpur, they laid 1100 square meters of Faux Silver leaves to the main foyer ceiling. Remember the Golden Chariot of the Sydney 2000 Olympics? They did that, too.

According to Karl, gilding was once a secret craft that was passed on from father to son, but today he enjoys teaching students from across Australia – and the world – from their Art Gilding Academy.

“It’s our mission to pass on our considerable skills to anyone who wishes to learn this age-old craft of gilding,” says wife Brigitte.

The Academy is the only place in the world where students can learn every aspect of gilding in a professional Master Gilding Class.

“During these nine days, our students learn more than they could in a three-year apprenticeship,” says Brigitte.

They also run a weekend gilding class every month for the slightly less ambitious. The Master Gilding classes are limited to four students per class and everyone who completes also becomes a lifetime member of the Goldfinger Club, which means they receive free ongoing support and a 20% discount on all tools and materials.

“During the year we also invite our Master Class students to join the Art Gilding team on a number of gilding projects to offer them hands-on experience under the watchful eye of the experts,” says Brigitte. “We believe the course not only adds skills to your chosen profession but also offers the freedom to build up a business and work from home.”