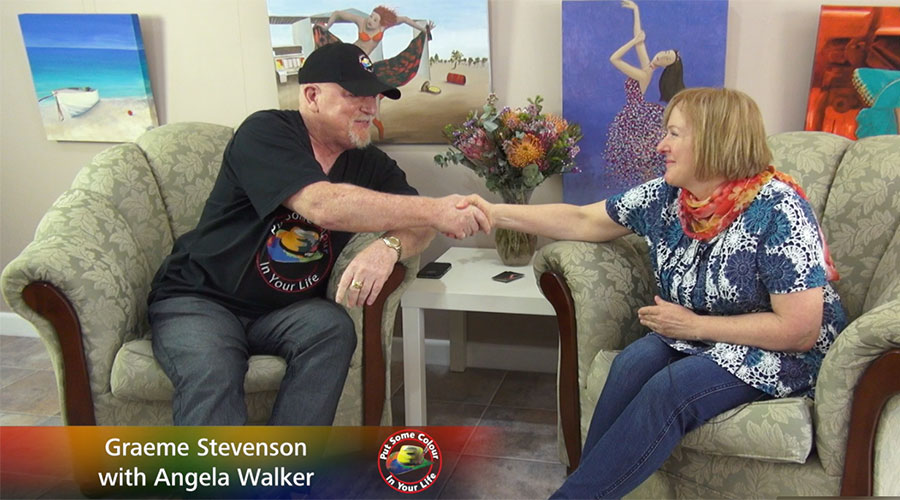 Angela Walker’s inspiration came in 2013 when she broke her ankle.  Unable to do much she thought she would like to try painting. Angela had painted the rooms in our house so many times her husband said that the rooms were getting smaller.

Angela Walker had never been encouraged to draw as a young girl but art was the only subject that she would get an A in. Angela went into nursing as directed by her mother and continued along with that until she found her way home to art. Angela felt she needed to know everything she could, so decided to obtain a degree. Angela learnt so much and would recommend getting a degree to anyone who asks, she did find the practical side harder to learn.

Angela Walker finds the practical just requires lots of practice and experimentation and watching lots of Youtube clips, it’s the personal doing that helps the most. Angela loves faces and figurative works, her nursing background influences her in this aspect. Something about helping others has inspired some of her portraits. She is deeply interested in how humanity interacts with our environment. Angela Walker’s current series of works relate specifically to her surroundings on the farm.

Angela Walker lives on a farm in Dimboola. Originally the traditional owners lived along the river and waterways around the farm. When the first settlers came they asked some of the traditional locals where would be a good place to build a house. The settlers were told that this spot would be the best and so the homestead was built. Some of the original buildings remain and inspire Angela to draw them.

You can contact Angela Walker about her  art tips or art techniques directly via her website at angelawalkerart.com