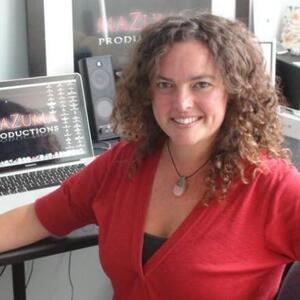 Colour In Your Life videographer, Sophia Stacey, has been there from the beginning. A Filmmaker, Editor, and Director with extensive experience in documentary television film and video production, music video, and independent documentaries, Sophia focusses on the genres of art, nature, and music.

Sophia studied Film and Music at La Trobe University, Melbourne, Australia. She has worked on and produced a wide range of documentaries, music video clips, and television advertisements. Subjects such as the Dolphins of Port Phillip Bay, Local History, Classical Music, Science, and Art products. She is the owner of MaZuma Productions and has been the head of the Production Team for the Colour In Your Life TV Show since 2010. As part of her role with Colour In Your Life, she also presented the series from time to time, and her effervescent personality and inherent positivity instantly puts people at ease and shines through the screen.

Sophia is passionate about music, and prior to 2012 had a fulfilling career performing in theatre and dance. She has performed and taught various instruments including piano, bass, vocals, and guitar. She is also well known for songwriting, recording, and takes classes in all these genres.