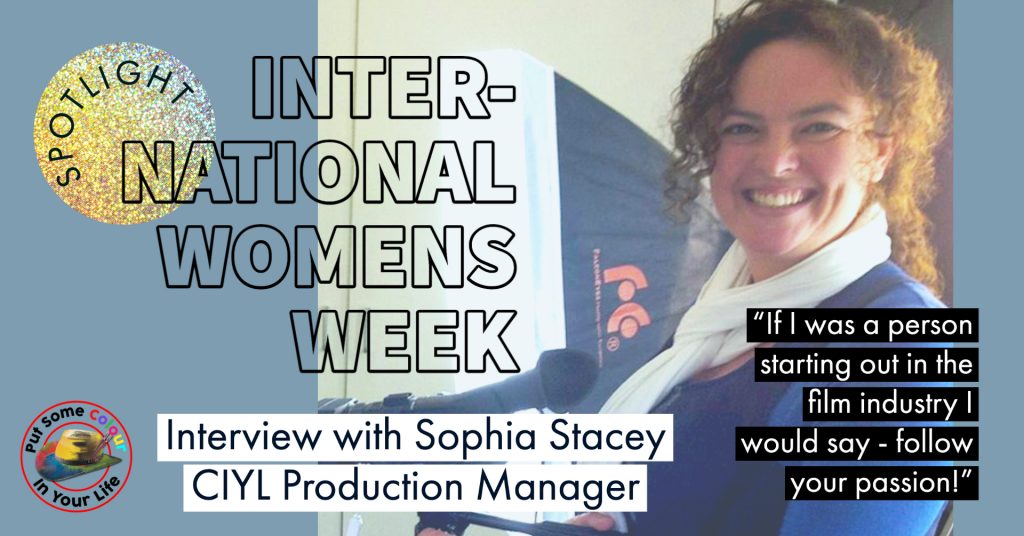 To celebrate International Women’s Day we decided to feature our own Sophia Stacey. Read her interview here.

When doing a feature for International Women’s Day this year I was looking around for an inspirational woman that we could feature. Sophia Stacey came to mind. Sophia has been working with the international art TV series ‘Put Some Colour In Your Life’ since 2011 as the director, videographer, and editor. She has filmed over three hundred artists in seven countries. The shows continue to be seen on TV stations in over fifty countries, and by millions via online streaming services. In an industry predominated by male filmmakers, Sophia has certainly made her mark.

I had the opportunity to ask Sophia some questions about her life, and she revealed a very interesting tale.

1. Your family came from the Bahamas or the Caribbean didn’t they? When did they come to Australia? And who was it? Can you tell me a little bit about that?

My great grandfather was an architect in England, but after his fiancée left him he decided to move to Jamaica to grow potatoes (as you do). This was rather successful until others realized how easy it was to grow potatoes, so he then went into farming cattle, bananas, and logwood, which was a thriving business. He had the farm in the hills and bought a holiday house, Llantrissant, on the beach at Negril, which is where my grandmother was taught to paint by her governess. My great grandmother and my grandmother grew up in Jamaica and my mother was born and raised in Montego Bay. When Mum was in her 20s she moved to Canada to study Nursing, and then to England where she met my father.  They married and came to live in Australia.

On my grandfather’s side there were also three generations from Jamaica.

My father grew up in Geelong, Australia, however, before joining the Merchant Navy (which is how he ended up in England) he was training at the famous Percy Cerutty Training camp ‘Ceres‘ in Portsea, where many Olympians were trained by my ‘Uncle’ Percy. When Mum and Dad came to Australia they lived with ‘Uncle’ Percy and ‘Auntie’ Nancy.

2. You were born in Melbourne? Whereabouts? And when and why did you move to the Northern Rivers?

Mum and Dad moved into a place right on the beach in Portsea – two doors up from the Portsea hotel – and this is where I spent the first five years of my life.

We then moved to Sorrento and I lived there until I was twenty-six.  After completing VCE at seventeen, my boyfriend and I had a charter boat – taking people out to swim with the wild bottlenose dolphins. Fast forward about ten years and I met Rob – who I played in bands with and recorded about four albums. Together we renovated a few houses and decided to move to NSW, where his mother had bought a holiday house, and we bought a house in Uki.

After separating with Rob I knew that the Northern Rivers was where I wanted to live and eventually I found my own place right on the beach in Cabarita – which is where I have lived for about eleven years.

3. Did you love filmmaking growing up? What were your passions growing up? And did you do any extra study at school? If so what was it?

From a young age, I studied classical ballet, jazz, and contemporary dance, and won various choreography competitions and won many scholarships. I was involved in theatrical performances from 5 – 18 and thought I was destined to be an actress. I studied journalism and film production at high school as well. When I enrolled at LaTrobe University, the acting class was full, so I studied Film and History, Cinema Studies, and Music. This led to documentaries about the local history of the Mornington Peninsular and the Dolphins of Port Phillip Bay. Photography was also my passion and I had extra-curricular classes in piano/keyboard as well. So yes, I had a passion for music and film from a very young age.

4. When did you move to Cabarita? And why? And what do you love about it?

Cabarita resonated with me.  After living in inner-city Melbourne for ten years I needed to return to the coast. Sorrento was too cold and when I came to Cabarita – I felt like I was home.

5.  You started working for Colour In Your Life in 2011? How did that happen? And what are some of your career highlights with CIYL?

I had been living at Fingal Head with a friend for three months before I found my home in  Cabarita. We went out to lunch and met Graeme Stevenson (founder and host of Put Some Colour In Your Life), who happened to be there as well. My friend had known Graeme for many years and they started chatting. I was designated driver that day and while they sat and chatted, Graeme brought out his book that had just been released with his astounding artworks matched with descriptions. So I sat there – as they caught up over a drink – and I read it from cover to cover. I thought… ‘this guy thinks the same as me’ and we became friends instantly.

Graeme came over to visit my friend about a week or so later, before I had moved out, and was talking to her about his idea for this new TV show he was about to develop. I had just bought my camera and computer to start my career in filmmaking (after deciding not to teach piano anymore). We kept in contact via emails and I said that I was available to help him. I produced a documentary called ‘Discovering a New Science’ with Robert Pope – who happened to be one of the very first artists that Graeme filmed.

When I sent him the link he rang me immediately and asked if I could come and work for him… on Friday. …it was Wednesday!!!

So, we filmed Sharon Hindle that Friday and from there it took off!!! The following week we filmed Rock on Gallery and two weeks later, Mealie Batchelor, then Peter Mortimore and Frank Miles – it certainly was a very exciting time of my life.

There are so many highlights it’s hard to pick only a few – I think every single artist I’ve filmed – I have had that feeling of extraordinariness!!! But… to start with… I remember filming Peter Mortimore – I got some extra shots in the streets of Bangalow and I had to stop traffic to get the shot I wanted – I remember it like yesterday. I felt like I was a Hollywood director that day! But I had to do it all by myself. I certainly had an overwhelming sense of joy.

Some of the earlier moments filming Put Some Colour In Your Life were also extraordinary and I felt like I was living in a movie. Flying to film Joseph Zbukvic (one of the world’s best watercolour artists) in Melbourne was a major highlight – it was the 13th episode of Season 1. I had one camera and had to rearrange his studio for lighting and so I could get the best shots. It seemed to come very naturally to me. On that trip, Graeme said to me that we would be filming in America one day, which of course we did on several trips.

Filming Ken Done was a big highlight. Filming Ernie Dingo was rather incredible as well. He is a good friend of Peter Mortimore’s and had suggested to Ernie to do an episode.

He said I reminded him of his grandma – strong and gentle all at the same time.

He called me ‘Princess Sophia’! When I said… “cut! Let’s try that bit again”, he’d say, “Yes Princess Sophia – whatever you ask me to do I will do it for you”. We certainly had a lot of fun!

It has been an astounding journey – filming in New Zealand, places we stayed, and roads we have traveled. Filming in the UK was exceptional, especially filming Paul Stowe in Cornwell. Filming in Hollywood was also pretty cool as well.

6. If you were a young woman starting out in the film industry, what advice would you give?

If I was a person starting out in the film industry I would say –  follow your passion!

When I started my business, I dedicated every moment to study on YouTube and I learned how to edit as it had changed so much since I had been at University. I went to the One on One sessions at the Apple store and realized – I knew more than them – but every time I went – I still learned one little thing I hadn’t known before. Always keep learning. I invested many, many hours developing my skills. After doing my business plan and looking at projected income – I realized one day that in three months I had recouped the money I had invested in the equipment that I bought and now after ten years being a professional filmmaker – I know it was worth the time to invest in myself at the start. In the first months of starting my business, I bartered with a few business people to help me. It can be very worthwhile to do projects with people that can help you expand.

7. What are your future aspirations for your career?

I have so many future goals and aspirations – but I need to make a new business plan!! *Giggles*

Sophia is currently the prime filmmaker for the Put Some Colour In Your Life TV show but is also freelancing to other clients for creative projects like art tutorials, music videos, and even cooking shows. To contact Sophia go to her website: https://www.mazumaproductions.com/

Posted in Blog, Your Colour In Your Life Story
← Fox“Silver Princess” Gum Blossoms →