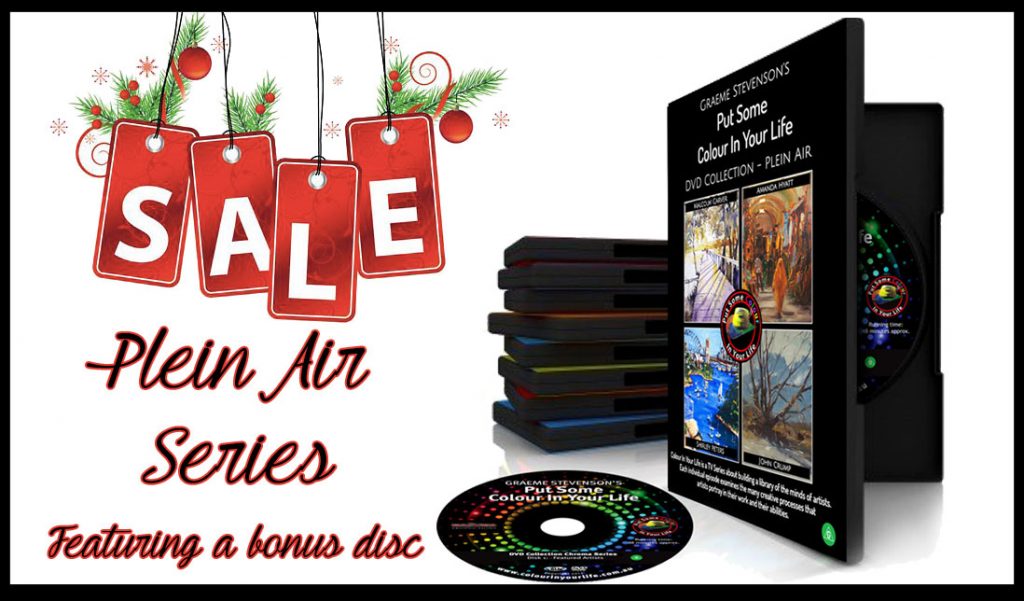 Plein Air Tutorials from your favourite Colour In Your Life Plein Air Artists.

Our fans have told us this is what they’ve been waiting for, a whole series of Plein air artists. So what are you waiting for get your Plein Air Tutorials today!

Joseph Zbukvic is regarded as the worlds leading water colour Artist and the Colour In Your Life TV show and team had the rare privilege to spend the day with Joseph in his Melbourne Studio. Joseph Zbukvic is a leading master of the watercolour medium of his time. His impressive achievements and enormous success is due to his ability to transform any subject into visual poetic language. Covering an infinite variety of subjects, his sensitive, lyrical and atmospheric paintings have captured people and galleries from all around the world.

Alvaro Castagnet is one of the world’s most highly respected watercolor artists. He has been recognised with top international honours for his painting and his art graces the walls of many private and corporate collectors worldwide. Alvaro is in constant demand for solo exhibitions, workshops and instruction. His expert eye is highly sought after as a juror of prestigious art shows. The art of Alvaro Castagnet captures the very soul of his subjects with passion, boldness and elegance. His paintings are imbued with a mood, a mystery that engage and lure the viewer into the magic. He is an expressive painter. He exhibits a strong, impressive and colorful style with superb interpretation of light effects that capture the soul of places he paints.

Savva is a master of the watercolour medium. His impressive achievements and success, is due to his ability to capture and portray the mood, light and atmosphere in his paintings with clean, decisive and passionate brushstrokes. Covering a wide variety of subjects, his sensitive, impressionistic and atmospheric watercolour paintings have captured peoples hearts, galleries and collectors from all around the world. His photographic background, exceptional drawing skills and a natural talent towards the arts from a very early age, has made him proficient in any medium. However, his incredible passion for watercolours has elevated him to become a unique master of that medium.

As a painter John Cosby travels extensively painting what he sees and feels. Bold use of color and an energetic brush stroke combined with the truth of the place is what you will see and feel when viewing a painting by Cosby. Born in Hollywood California in 1955, John Cosby was raised in the west. At an early age he began to draw and paint and was lucky enough to have been inspired by a grandmother who was an oil painter. “She would give me the paint, some brushes and a scrap of canvas and set me off to paint. This early experience took the fear out of creating a painting,” said Cosby.

Malcolm Carver, former Principal of Scott Carver Pty Ltd, is an architect and an artist. He is obsessed with watercolour painting, drawing and teaching around the world in workshops whilst traveling in search of new imagery for exhibitions and sketchbooks.

Excelling in both fields, Peters reputation as an illustrator was cemented when she had a book shortlisted in the coveted CBC Book of the Year Awards in 1991. With an illustrators eye for composition, colour and line, Shirley is revelling in the freedom of creating her own narrative in paint and with her first solo exhibition in Sydney through Gallery V.

John Crump has worked at the never ending task of improving his painting as he tries to express his love of the things we see around us – particularly the landscape, but also flowers and still life from time to time. Being in the heart of mountain country has given John an unlimited choice of subjects at his doorstep. He is also able to teach small groups of painters in the inspiring mountain valleys and favourite spots around Lake Wakatipu. When a change of subject is called for, the coastline is never too far away. His paintings and written articles have been included in books and art magazines, he has held many successful one-man exhibitions and group exhibitions, and has taught adult students in art societies and polytechnic summer schools throughout New Zealand.

Debbie Lambert over the years has travelled extensively throughout the country on painting trips and has had painting trips overseas to Italy, Prague, Austria, Hong Kong, Ireland to name a few, but she always happily returns home to her favourite painting ground. She has a strong desire to explore and paint on location, usually staying in DOC or farm Station huts or even tenting. Sometimes Debbie flies inland by helicopter to remote spots but more often she drives her (4WD) truck which has been specially set up, accompanied by husband or painting buddies to paint en plein air.

Portrait artist Penelope Gilbert-Ng creates classically inspired contemporary custom oil and pastel portrait paintings for official, corporate and private commissions. Her oil portraiture brings to mind a level of craftsmanship and artistry that many believe no longer exists. Her paintings are inspired by the very sensibilities of the Impressionist Era. By combining superb draughtsmanship with subtle life-like colour and deft paint handling, Penelope creates cherished heirlooms that reveal the true spirit of her subjects. Whether you wish to honour a beloved family member, recognise a momentous career achievement, or give that special someone a truly incomparable gift, you can commission Penelope to create an extraordinary, unique and timeless work of art.

Eric Rhoads is driven to help people learn to paint. Because painting changed his life he has a goal to teach a million people to paint because painting brings joy into your life, reduces stress, makes you happier, and it taps into your creative side. Eric’s story is pretty amazing. Other than colouring and painting sloppy pictures in grade school Eric had not painting experience and he had zero talent. He could not even draw a stick figure. In his late thirties Eric thought it would be fun to learn to paint but he did not really believe he had what it takes. At the time he believed painters doing beautiful pictures had some form of natural gift or natural talent. He later proved that was wrong.

An established artist of thirty plus years, Linda Gunn was taught to draw at an early age by her Disney Artist grandfather, George Drake (hired by Walt Disney in 1929 to hire and train new artists for the fledgling Disney Studio).
Linda Gunn, an avid reader of illustrated books, became encouraged toward painting by the works of the famous illustrators Howard Pyle, NC Wyeth, Norman Rockwell, Arthur Rackham, and later by the paintings of Andrew Wyeth. At the age of ten, she was given John Gnagy’s Art Studio in a Box. It contained instructional books with supplies for drawing, oil and watercolor painting. She also had several opportunities to visit the works of her favorite artists through visits to the Los Angeles Museum of Art and the Barnsdale Park Art Gallery in Los Angeles.

Approximately 10 years ago, 3 decades after the initial creative stirrings inLynley van Alphen school years she restarted her art journey. Although ‘real’ life had ruled in the interim, her artistic passion was always there, quietly simmering away in her soul until she could no longer contain it. Lynley van Alphen is described as ‘self-taught’, However she has studied and learnt from the best. Several workshops with well-known NZ landscape artists later, and as well as studying many books and online tutorials, she finds herself on the path that she truly wants to travel. Lynley van Alphen lives in and paints the beautiful Catlin’s area in the south east of New Zealand’s South Island, fortunate enough to own her own studio and gallery space. Lynley’s art is evolving, before she painted careful renditions, now she finds contentment with oil in an almost abstract way with her landscapes using big bold brushstrokes and buttering thick paint on with a palette knife, and with watercolour letting the pigments run freely searching for the essence of the scene.

Richard Robinson is a full time impressionistic artist, living and painting in the beautiful North Island of New Zealand. Having lived in Whangarei for most of his life, Richard finds himself somewhat biased when it comes to thinking of beautiful places. Though he has travelled the world, Richard still finds the familiar scenes of his homeland just as new and exciting when approaching them with a paintbrush.

Plein Air Tutorials brought to you by Colour In Your life. Get the DVD’s Here