Graeme Stevenson is best known to us as the helmsman of the Colour In Your Life TV Series.  He has been creating in various mediums for over 30 years now.  After leaving school, Graeme took up carpentry and became a paramedic while attending the Sydney Art College for five years, but left his career as a paramedic in his early 20’s to travel the globe. He obtained a pilot’s license at age 21, and has since travelled around the world extensively, living in five countries, in search of subjects to paint. Stevenson became a wildlife artist, photographer, explorer and naturalist.

He was commissioned in 1988, at the age of thirty, to provide every image for “The Atlas of Parrots,” which is one of the largest editions in the world regarding parrots. Published in 1991, the book remains one of the greatest reference books on the subject, and can be found in natural history museums around the world, including New York, London and Paris.

This multimedia art tutorial is Part 1 of a 2-part series on creating the amazing multi-dimensional piece “Stallions of the Heavens”.  In Part 1 Graeme shows us techniques for using stencils, inks, gold paint, cardboard and gold leaf; and explains the importance of developing a plan and process in creating a complex artwork like this. 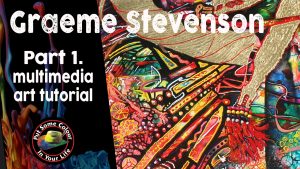 For more info and to watch Graeme’s episode 1 on media with Colour In Your Life click here.

Posted in Blog, How to Paint
← Nervous about being filmed by Colour in Your Life? Read these tips from our artists.Handmade necklace Summer →