Alongside art, Graeme Stevenson studied martial arts and bred Australian parrots, learning falconry and studying taxidermy in his teenage years. Through these hobbies, Stevenson gained a better understanding of avian anatomy. This would prove invaluable as he combined it with his passion for art, using his pet birds as subjects and starting his journey as a wildlife artist.

After leaving school, Graeme took up carpentry and became a paramedic while attending the Sydney Art College for five years, but left his career as a paramedic in his early 20’s to travel the globe. He obtained a pilot’s license at age 21 and has since travelled around the world at least 20 times, living in five countries, in search of subjects to paint. Graeme became a wildlife artist, photographer, explorer and naturalist.

Graeme Stevenson has spent the last ten years growing his TV show “Put Some Colour In Your Life”, and is dedicated to building a library of the minds of artists to preserve a digital record of creative spirit, culture and techniques for future generations.  You can view Graeme’s work here.

In this video, the second of Graeme’s 2-part series in mixed media, he demonstrates using several diverse mediums and materials including inks, gold leaf and squeeze bottle acrylics, techniques and tips during the creation of his piece “Devine Devil”.  Settle in for a creative colour explosion! 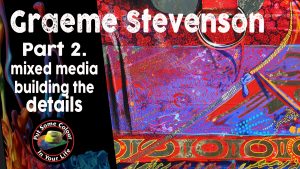 For more info and to watch Graeme’s episode 3 on watercolour with Colour In Your Life click here.

Posted in Blog, How to Paint
← Im Loving the sun“The Shed Door” →