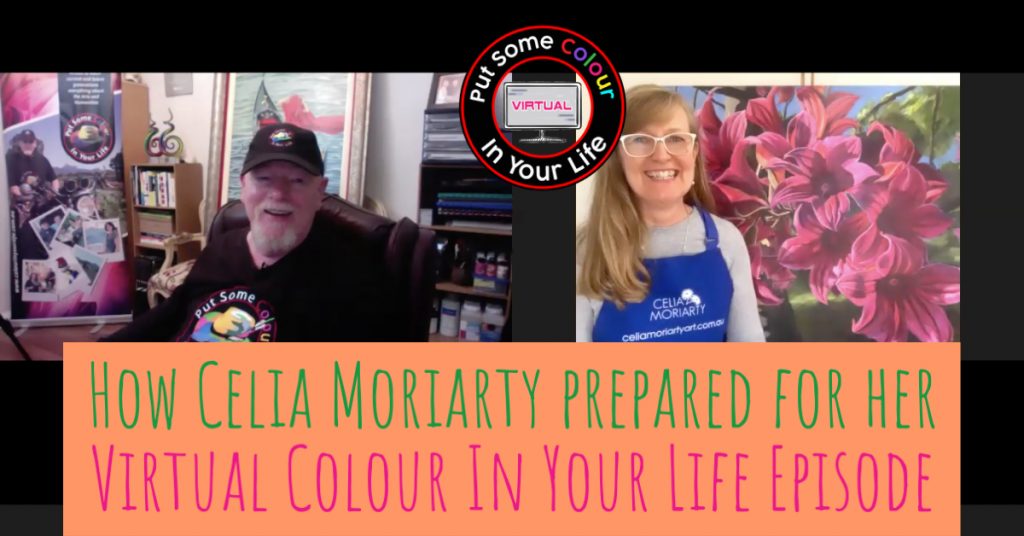 When I saw Graeme’s post announcing virtual Colour In Your Life I contacted him immediately to say I was in.

I create little videos of my own work and new an iPhone creates a good result and I had been using Zoom. Not a necessary thing but why I felt confident this would work.

The things I had to sort out were:

I would be responsible for the physical film and audio technology at my end. The better the technology I can provide the better result for me. Luckily I new my iPhone worked but, I was aware that CIYL usually use a number of camera angles so that would mean more than one camera. So I borrowed another iphone. I checked that my iPhone cameras had enough memory to be able to film for a couple of hours.

What I did was set up a Zoom meeting with a friend and we tried different cameras and sound. Zoom is free and you can start a meeting anytime and press record to do test runs and get comfortable. I logged on with my iPhone, a friend’s iPhone, my computer and later an iPad. Note: you can only have the sound switched on on 1 device or things get a bit fraught.

What I found was that the Zoom video recorded from my computer was inferior to the video from my phone. It turned out that my new MacBook Air has only a 1 megapixel camera. Don’t get caught up in having to understand technology and pixels, it is not necessary – it just meant not as good as my phone and not good enough for me. So I ditched the idea of using my computer. I have a SmartLav lavelier microphone but after testing did not use it. As long as you are close to your phone it’s audio is designed to pick up voice. I don’t think anyone else could tell you if all your equipment is appropriate – better you test it and see and get peace of mind that way to ensure you are giving your investment in the show the best chance.

If you can stream movies without a pause your internet is probably good enough. I rang my provider, Internode, to discuss what I was doing and upgraded to their fastest plan to make sure I had the fastest connection possible. After the show I was able to drop back to my previous plan. Too easy.

3. Creating a feel for the artist

I was aware that Graeme often goes for a walk and gets more shots of the studio or surrounds of the artist. If you look at my episode you will see footage of me walking in a semi rural area with Gum trees and even a koala. I paint Australian natives so this is what’s important to me. So I drove 5 min away with my brother, gave him my iPhone told him what to shoot and Voila! It took us half an hour, looks great and gives the tone and mood I was after – connecting with nature. Sophia then cut this into my episode.

4. How it all works together

I am a covid refugee unable to return to Victoria. The episode was shot in my Mum’s TV room. I used her old plein air easel for that big painting, had purchased a cheap tripod off the internet for my iphone and a desktop one (clipped to a card table) for the other iphone. I put the iPad on the clothes horse. We gave each a clear name in order to work with them and move them into place. If I had been at home I have friends who could have helped, but here I did not, so I managed all of it myself – I don’t recommend that, but you can see it is all possible. It really is all about your own willingness to practice, anticipate and work it out. It is not hard but it is important to nut it out and get comfortable before the recording so you can focus on painting and answering Graeme’s questions.

The CIYL team are a crack team of professionals. They supported and guided me to ensure everything worked and the camera angles were what they wanted. I had the canvases ready to go.

What could go wrong?

I did a practice with Sophia before the day and we added the ipad as another camera angle. I had not checked it’s capacity as it is not used much (not mine) and it’s iCloud storage was full and the camera switched off. I had it sitting on the clothes horse leaning on a tissue box so could not see that it switched itself off.

The secondary borrowed camera also switched off at one point. This meant one half of the interview captured on the iPad and the second half captured on the secondary camera. The main camera was recording all the time so could not have switched off without us knowing. Fortunately, Sophia is a great editor and made it all work anyway. So, even with stuff-ups at my end we got what I feel is a great result. The things that are important to me got mentioned and the episode does what I wanted it to.

We are all getting use to distance interviews and double screens so I don’t feel that detracted from the end result. It was 6 business days after the announcement of the possibility of Virtual Colour In Your Life. I am really pleased I did it and feel I have connected with the right network of people for me. Thanks CIYL Team

On the live call today that allowed people to ask about doing a virtual episode of CIYL I was asked if in my preparation for the show we created story boards or scripts?It made me realise that I had not yet mentioned a really vital part of the artists own prep – Who do you want to be perceived as?
In our industry as Artists it is expected that we have a bio that accompanies our work and serves to introduce us. It is good to have that voice and opportunity.  If you are like me, you want to know how best to create your bio? I read artists Bio’s wherever I go to learn from what works and adjust mine.

The CIYL Episode about  you is your opportunity to have a world wide respected Master Artist introduce you.  When someone else introduces you your credentials carry more weight and by association to a master your credibility is established.
So I had written down the things that are important to me:

I have only been painting a few years. I am self taught. I do not have years of experience and networks behind me.  That is what CIYL is giving me. However, in my career I have coached presentation skills in the senior executive environment for 20 yrs, been the speaker on Power and Influence at University post graduate level all around the country and am an experienced business pitch coach.

So I can tell you confidently – who you want to be seen as is your part of the preparation.  You are pitching to the world who you are and want to be seen as.  You get to make that call which is pretty cool.  So doing the episode is part of our own crafting of our public persona while allowing that genuine light of who you are to shine through.  That takes purposeful practice. What I’m saying is we all have to be able to do that anyway and keep crafting it all the time. The CIYL team can assist you and they are so wonderfully supportive.  But really, this is part of our craft to practice telling our story to allow others to get an insight into creative creation.
So back to the original question.

No, we did not have specific scripts or story board.  I’ve watched the show – Graeme introduces the artist and then we get on with the work and he and the team are skilled at drawing out the right information.  I had done a run through the day before for the technical side and had that all ready (as per my other blog info).  It is so exciting to make the decision to be on the show that we could be forgiven for being starstruck and waiting to be told what to do.  But a passive role is less likely to get you what you want.  I am paying for the episode and therefore need to put on my client hat and ask myself – what do I want, how will I quantify that, who do I want to be perceived as? I need to own that space before we begin.

As previously mentioned 6 working days elapsed from Virtual CIYL being announced to filming – because I wanted to get it done before the launch of my online course and the CIYL team were responsive even though we had all not done this before.

You will be like me – some areas I’m ahead in and some behind.  The trick is in knowing your own strengths and weaknesses and playing to your best.  You will have much more time to get ready and think things through than I did, I just wanted to respond to a very good question about preparation and what to focus on to get into the right headspace.  Good luck.