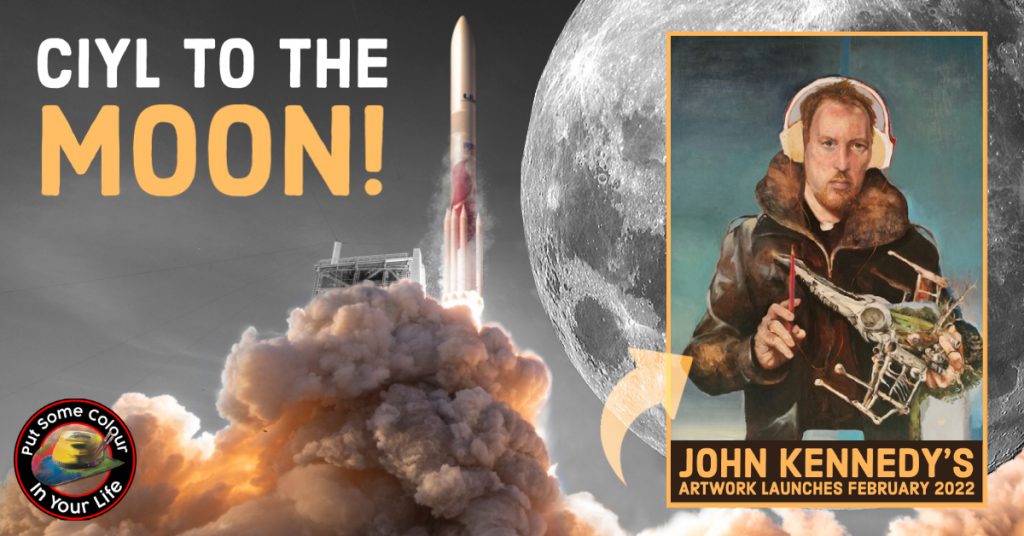 The Murwillumbah based art TV Show, Put Some Colour in Your Life will take the great honour of being the first Art TV show represented on the moon and will become a permanent reminder of human creatives during the 21st century.

John Kennedy, a Colour in Your Life featured artist filmed in 2013,  was over the moon about the exciting news  he shared with Graeme Stevenson OAM, founder and CEO of the international TV show.

“What an incredible surprise to receive today! I am overwhelmed by the news that I will be amongst 44 artists, (published by Didi Menendez and curated by Steven Daluz in the Artistspoets issue 78), from around the world to be included in a digital capsule destined for the moon! “ John Kennedy exclaimed.

A magazine (Artistspoets issue 78), where John had featured with several of the incredible images of his artwork, as well as statements about the Art TV show where he featured, was placed on a Lunar Codex- a digital time capsule- in a registered DHL Moon Box that will be sent to the moon in 2022.

It was originally meant to be rocketed in the first commercial flight of the Space X rocket Vulcan in the Astrobotic Peregrine Lunar lander in July 2021 from Cape Canaveral, Florida, but due supply chain issues will be launched in 2022.

The Astrobotic Peregrine Lunar Landers, as stated on their website are ” empowering a thriving human presence in space to explore the universe beyond the Earth Orbit”

“Astrobotic’s Peregrine Mission One (PM1) is poised to be the first commercial mission to land on another planetary body. With this flight, Astrobotic is opening the door to the next phase of space science, exploration, and commerce on the Moon and beyond”, the Astrobotic website explains. “Peregrine will carry a diverse suite of scientific instruments, technologies, mementos, and other payloads from six different countries, dozens of science teams, and hundreds of individuals.”

One of the most important cargoes that will be in the PM1 will be the Lunar Codex.

The Lunar Codex describes itself as combining “digital and analog technology with the intention to preserve a time capsule carrying global Visual art, literature, music, and much more. " The Peregrine Collection" will become a permanent reminder of human creatives during the 21st century.  This space arts and culture project carries great significance as it contains a diverse and expansive collection of art from all corners of the globe”.

1200 international artists and one AI poet have been selected by payload coordinator and curator, Dr Samuel Peralta to be uploaded onto the Annex 9 on Astrobotic's Peregrine Lunar Lander with a destination to land on the moon in an area named Lacus Mortis.

If you would like to learn more about this  Australian Art TV show that is not only on TV networks in over fifty countries but also now on the moon, go to www.colourinyourlife.com.au and read more.

To see more about John Kennedy see his CIYL show or go to his website : http://jedika.com/